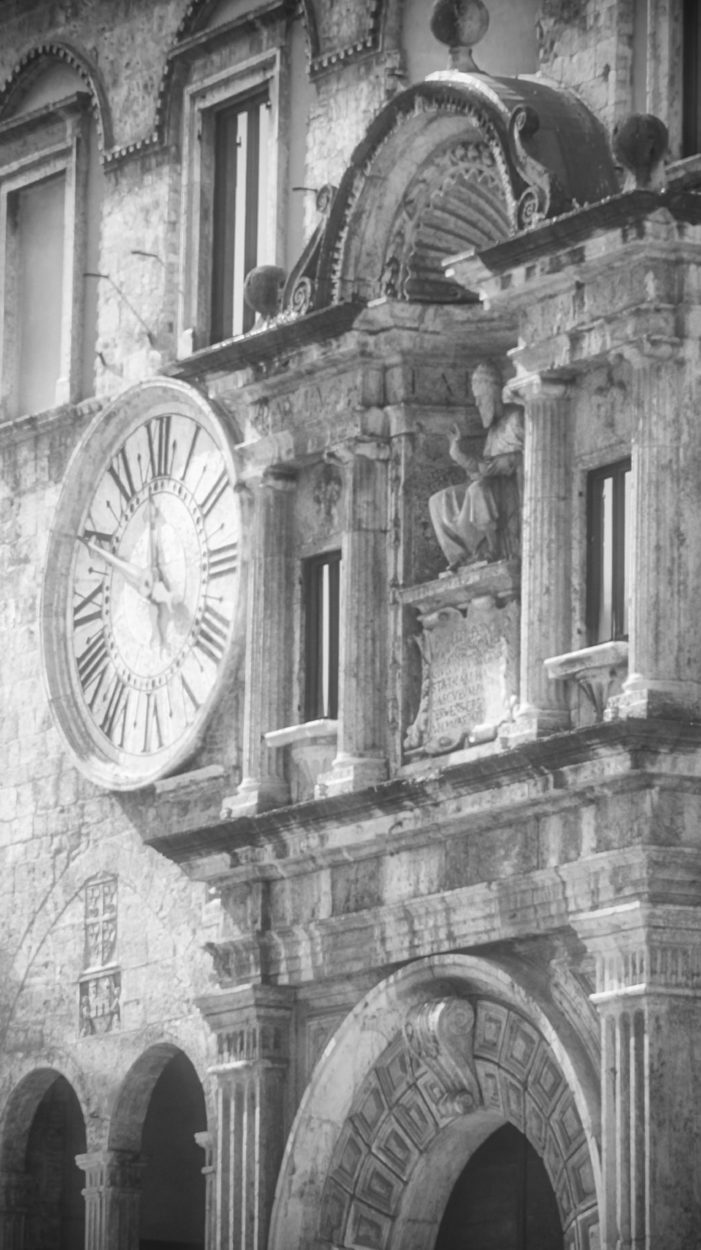 From a current series of photo excursions exploring an earlier technique. Ascoli’s Palazzo dei Capitani erected in the 13th century and modified in the 15th.

Our most recent Blog entry was last Fall after a return from a trip in the south of Italy by car. We commented at the time it had been fortunate we had made the trip when we did because on our return, COVID imposed restrictions tightened up. Restrictions have remained in force ever since, with some minor variations. We are still under a 10:00 PM curfew and the variations involve how widely we can travel and how much we have to rely solely on restaurant ‘take-out’ for dining when not home prepared.

In the not-too-distant past, there were coming together rituals we could participate in to bring some brightness into the encroaching gloom of Fall and Winter. But not so this year. An invisible scourge has descended on all of us and a succession of setbacks seem part of a path out of this viral malady. Finding resilience in the face of anxiety is taxing. Against this reality, an early perception of our elected new home has still remained with us.

Because Ascoli is somewhat self contained, the perception of a heightened sense of community solidarity has made an impression on us. But over the past year, so many public manifestations of that solidarity have been cancelled to avoid becoming COVID super spreader events. For the first time in over sixty years, the signature Ascolani Summer Quintana Medieval Festival was cancelled. Then Christmas and New Year observances were very much subdued as has been the Carnevale festivities, all without the typical opulent decorations in the piazzas and tightly packed coming together of people enjoying themselves. The regular and readily accessible cultural performance events have also been cancelled. The joy of sharing a protracted meal together with a group of friends around a common table is now also just a memory. Ascoli is subdued.

We are relieved to say we continue to be well and safe as are our expat and Italian friends. But we do what we can and look for something to get our minds off the consequences of protecting all of us from a virus. Our band of expatriates, together with our generous Italian friends, do what we can to maintain a sense of association and mutual support. Liberal use is being made of Zoom teleconferencing and as restriction on travel out of the Commune permit, we have joined friends for nature walks in a coastal wetland preserve and gather for a café at an outside spot with social distancing. And we are grateful for it.

As comfortable as we find our apartment in this very old, stone structure, knowing that we are supposed to stay somewhat sequestered in it probably makes having to do it, seem more of an imposition.  The absence of more easily accessible social and communal contact leaves little alternative other than looking to internal resources for stimulation and diversion.

Readers of this Blog have probably realized photography has been an interest of mine for some time. For me, there is a special satisfaction in exploring an alternative means of expression and opening a different avenue with which to interpret experience.  As in all art, there is a marriage between technique and an inspiration to achieve a creative expression.

It has been interesting to discover several artists in previous centuries used some of the principles of optics to enhance their own exploration of different media. The Camera Obscura is an interesting example going back at least to the Renaissance if not earlier, of employing a small aperture in the wall of a darkened space to project a two-dimensional rendition onto a surface within the darkened area,  of a three-dimensional outside world .

Art history research has revealed the highly detailed work, demonstrating very precise and detailed architectural renditions executed by Flemish artists in the seventeenth century, to have utilized the Camera Obscura technique as a creative aid.  I also found it fascinating to discover some of the Impressionist Painters in nineteenth century France also explored early photography as an asset to their painting endeavors. Degas is a notable example and there were others.

Art historians have identified the painting technique know as Sfumato, to affect the softening of the transition between colors and objects. This approach was employed and expanded upon by Leonardo da Vinci and others. Previously, earlier painting techniques utilized a hard boundary even to the point of applying a dark, thin margin to an object. The Sfumato technique was facilitated by the introduction of the use of oils permitting a flowing interaction in laying down of pigments and enhancing perceptions of transparency.

By the end of the nineteenth century, developments in the field of optics, driven by the demands of expanding scientific and technologic innovation, resulted in advances in a capacity of optical lens manufacturers to make lenses capable of rendering ever more intricately detailed, sharp images.  However, in the community of artists utilizing photography as a means of expression, there developed a counter movement.

With the turn of the late nineteenth into the twentieth century, several photographic artists prevailed on optical lens designers to also turn their attention in a different direction from ‘ultra-sharp’ optical rendition. These artists were seeking lenses that were ‘soft’ in their properties but while not being ‘out of focus’.

The result for photography was a few, essentially ‘uncorrected lenses’, not taking advantage of later techniques to enhance sharpness, were developed and gradually refined. Some of the earliest examples were of German design closely followed by examples developed in France, England and in the U.S. Their adoption was primarily encouraged in the expanding enthusiasm for photographic portraiture.

By the late nineteenth century some notable photographic artists had been using longer focal length, ‘soft’ lenses in both portraiture and in pictorial landscape work. The longer focal length lenses were initially required to provide an image large enough to cover a film size equal to the same dimension as the final print that would be made. That is because, initially, images were not enlarged by projection to make a larger print but the final photo print was made in direct contact with the film carrying the image.

In portraiture, the softening effect on minimalizing skin defects and the flattening effect of facial features inherent in longer lenses, made for more satisfied customers. In pictorial work, a flattening of the perception of near and far objects made it possible to compress more elements of a composition into the image.

Over forty years ago, I began studying some of the accomplished photographers of the late nineteenth and into the twentieth centuries. It became apparent what on first blush might have been considered a soft image believed to be determined by equipment limitations, was quite to the contrary, a deliberate artistic decision. As a result, I decided to investigate the approach firsthand.

After some searching, I was able to acquire a lens designed in 1927 to render ‘soft’ images. The version I acquired (a Rodenstock-Imagon) was manufactured in the immediate post war years in Germany retaining a faithful rendition of the original design.  As intended, I initially utilized it on a larger frame, so-called view camera, which I still occasionally use. I used this lens and camera in some of the portraits I have done of my lovely wife, Arlene.

Now, back to the present, with my time in sequestration, I began thinking this earlier design for a ‘soft’ lens could be interesting in attempting to do views of the historic center of Ascoli Piceno. But my current photographic efforts primarily use a modern digital reflex camera of a size developed for use of 35mm film. A lens that is used on a so-called view camera with a film size of 4 x 5 inches (9 x 12 cm) when adapted to a smaller format camera results in a digital camera format (24 x 36mm) only capturing a very reduced portion of the overall image available that is produced by the lens. That clearly imposes some limitations on how it might be employed.

That reality notwithstanding, an offshoot of having too much time on my hands and having grown up with a father who was a tool designer, who thought it important for his sons to be able to pick up a screwdriver without cutting themselves too many times, lead to giving adapting the older lens, a try.

After the anticipated trial and error, a lens adapting device came together. I will spare the boring technical details but suffice it to say, as with all new potential photographic techniques, there is a lot of exploration to be done to define the available potential.

To start with, what was I after? I wanted to see if images could be created that preserved a certain timelessness about them.  The historic center of Ascoli has always fascinated me because in some of the smaller lanes and in other places, it is possible to feel an incredible dissolving of time difference.

Another aspect of contemporary photography I wanted to reexamine is digital photography opens the possibility for further creativity in altering a photographic image after it has been taken. The new vistas that open for photography are inspiring. However, I was beginning to be concerned with all the after-photo-being-taken-manipulation, could encourage too much reliance on correcting ‘screw-ups’ in post-production ‘adjustments’.  I thought it might be a good idea to go ‘retro’ to concentrate on the basics in attempting to do it right the first time. Modern technology makes some processes so ‘efficient’ that we might have become too removed from the level of attentiveness attempting to be creative can involve.

I have now been out in the historic center of Ascoli a few times with my strange contraption. I have attempted a few initial images which I then brought back and downloaded into the computer. One concession I have made to digital manipulation is to convert the images to black and white to make them more compatible to how images like this would have been viewed when these lenses were first used.  I thought I might share a few of the early experiments with this technique with you.

We all find our own accommodation with ways to live with what is being imposed on us. With any good fortune, this curse will be lifted before long. There are only so many crazy gadgets I can dream up. 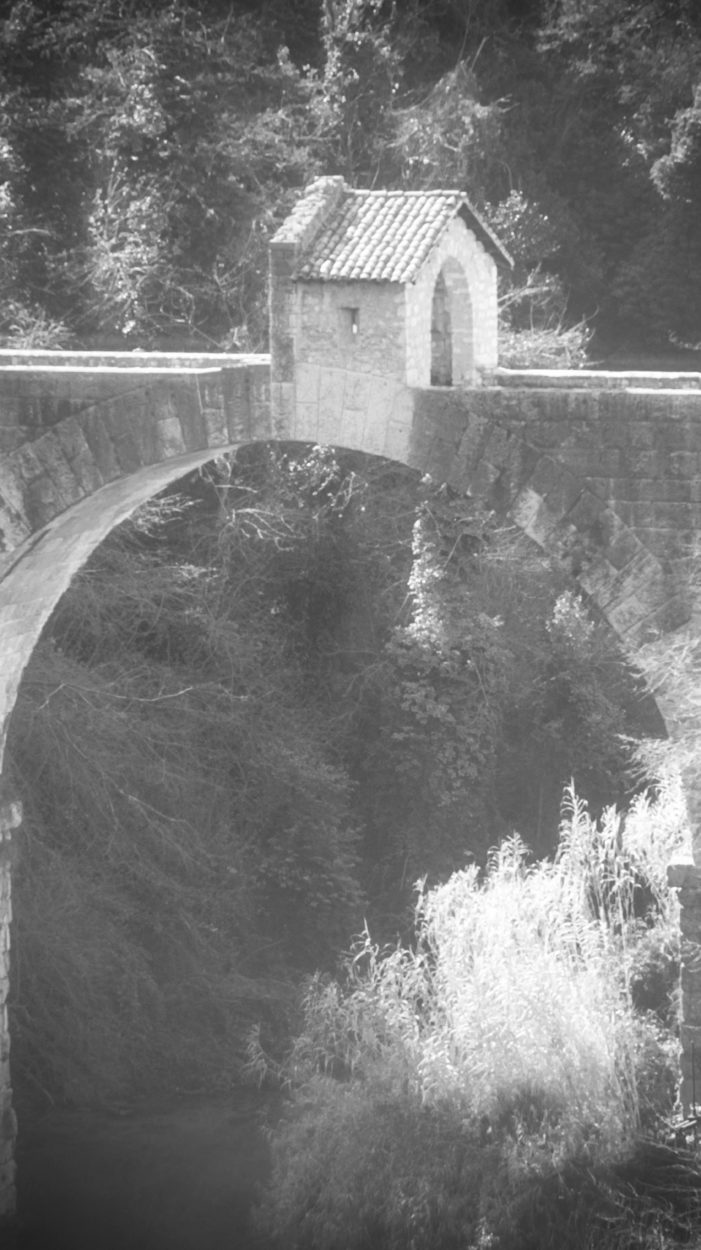 The Ponte di Cecco with guard post leading to the Fortress Malatesta. 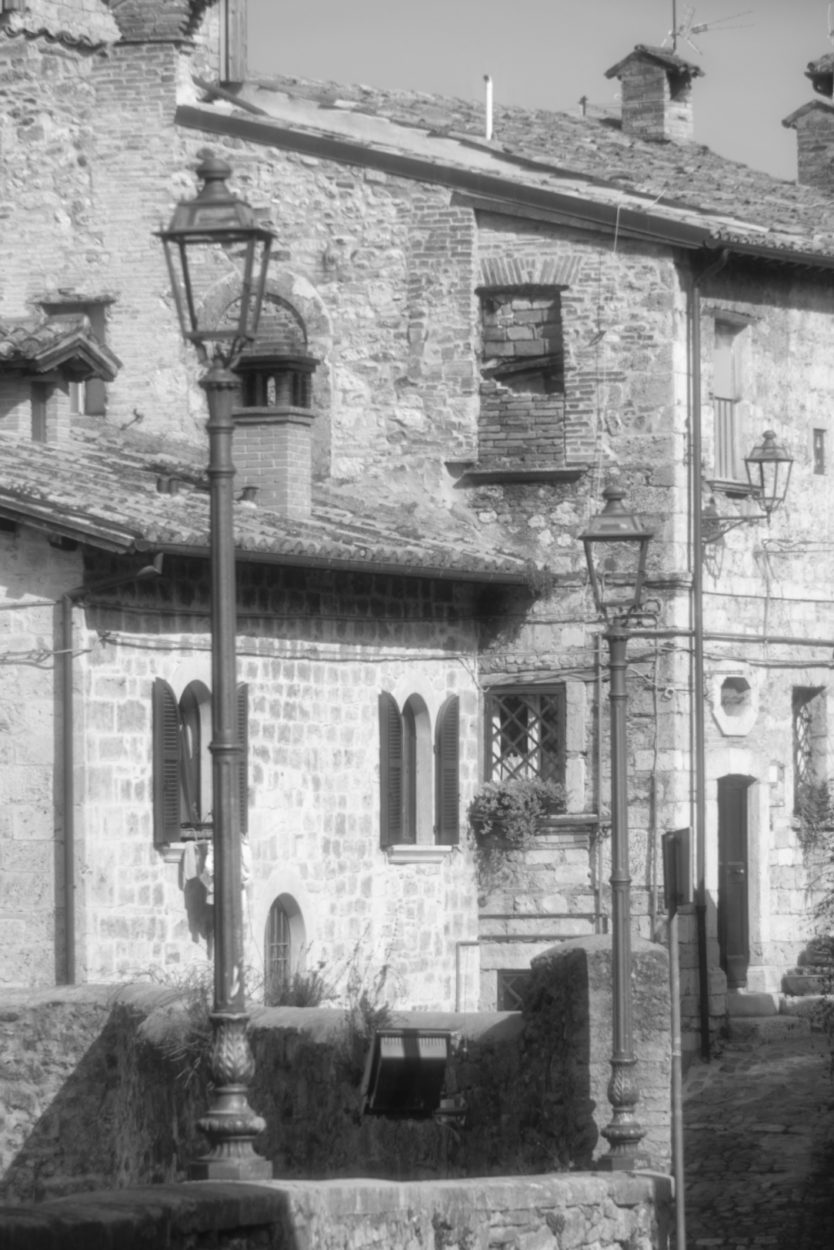 Along the Rua delle Stelle 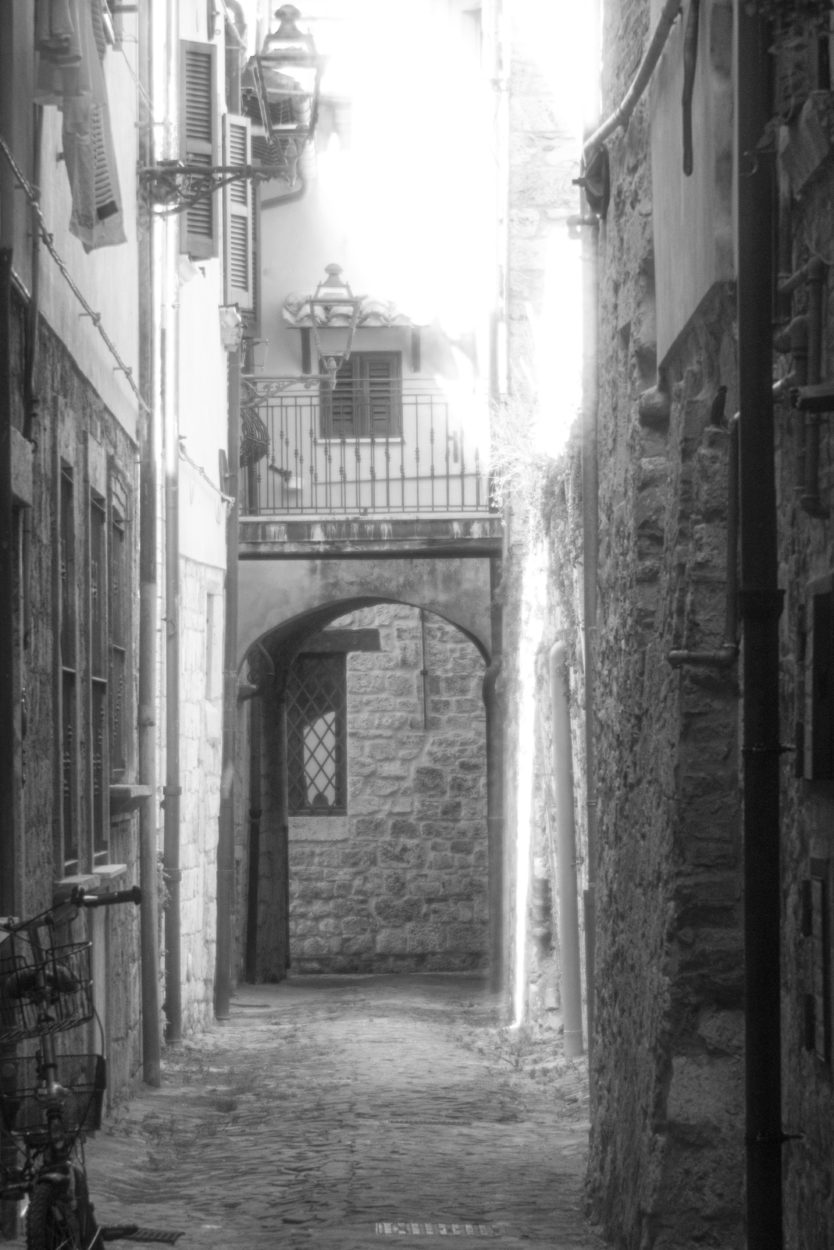 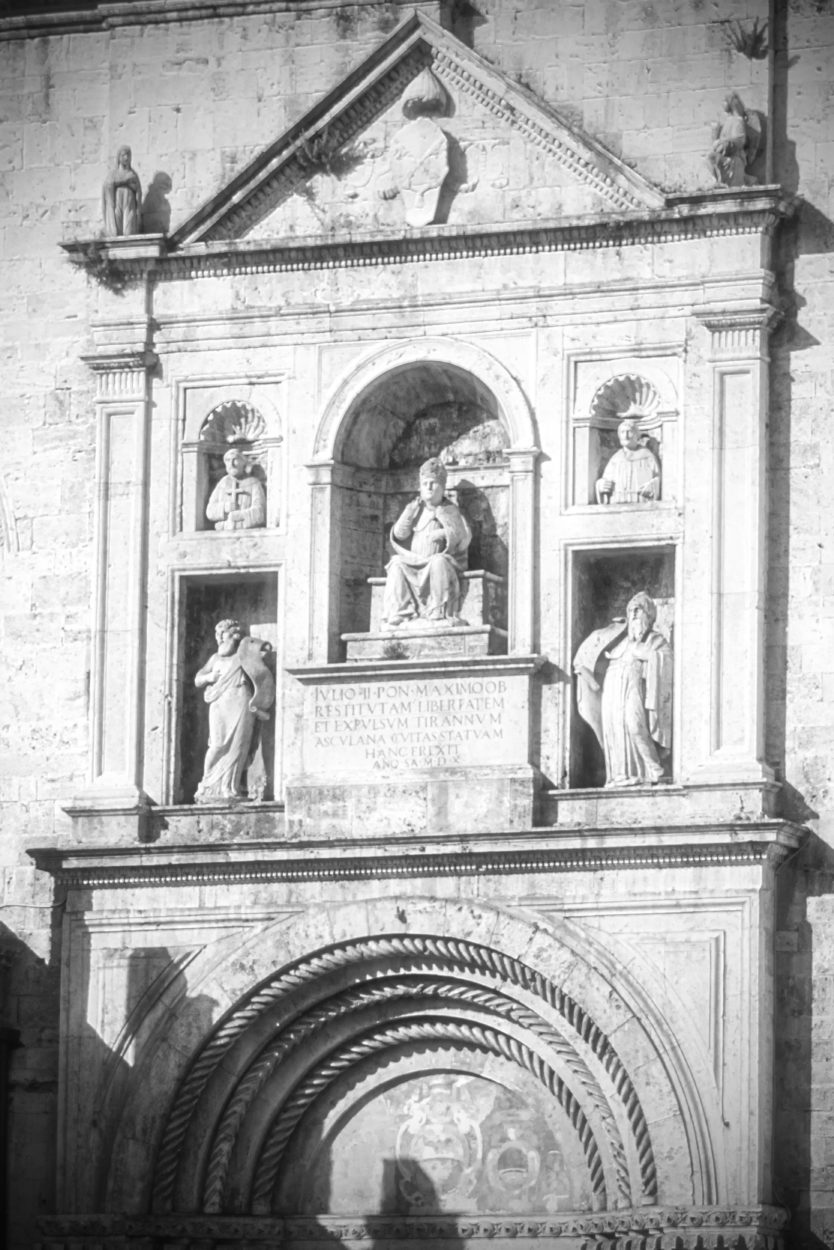 The south wall of the nave of the Church of Saint Francis begun in 1153 with an homage to Pope Julius II delle Rovere of the 15th century. 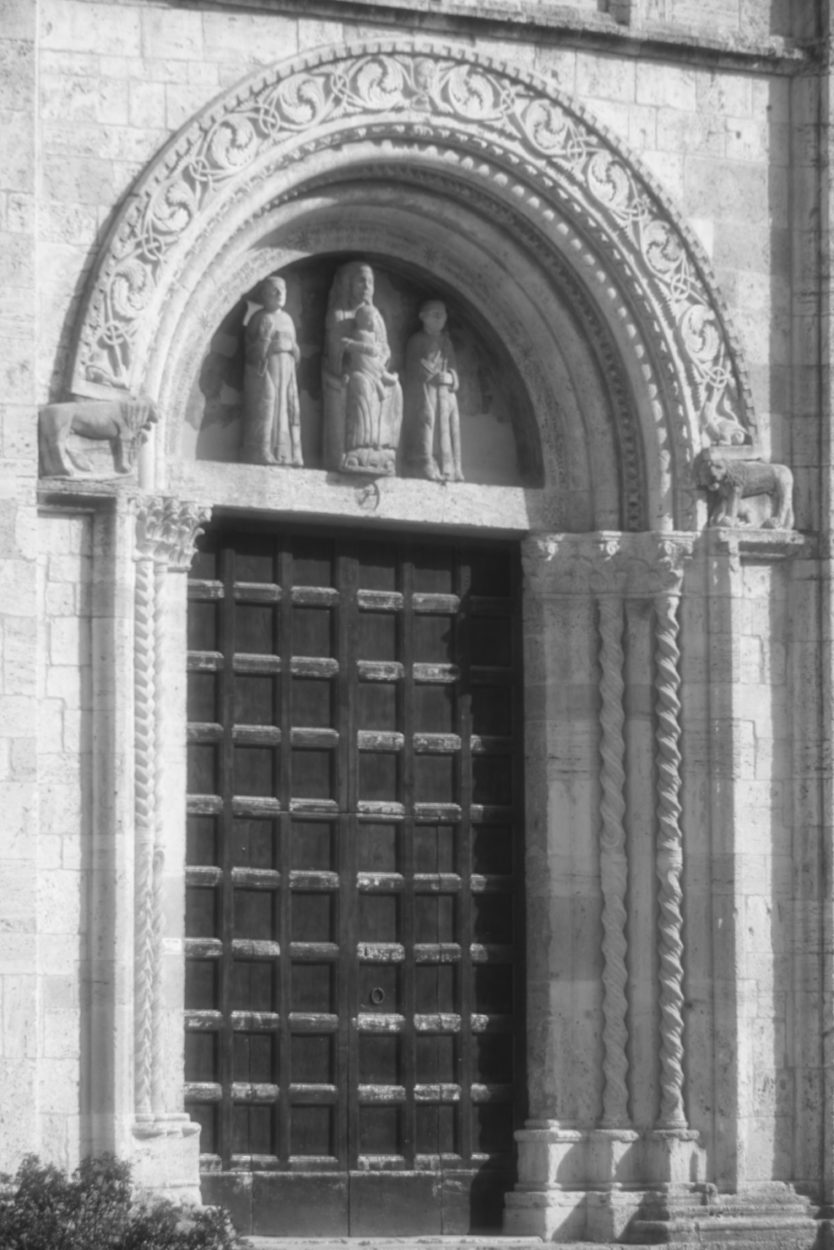 The main portal to the Church of San Vincenzo and Anastasio with a lunette sculptural group from 1306. 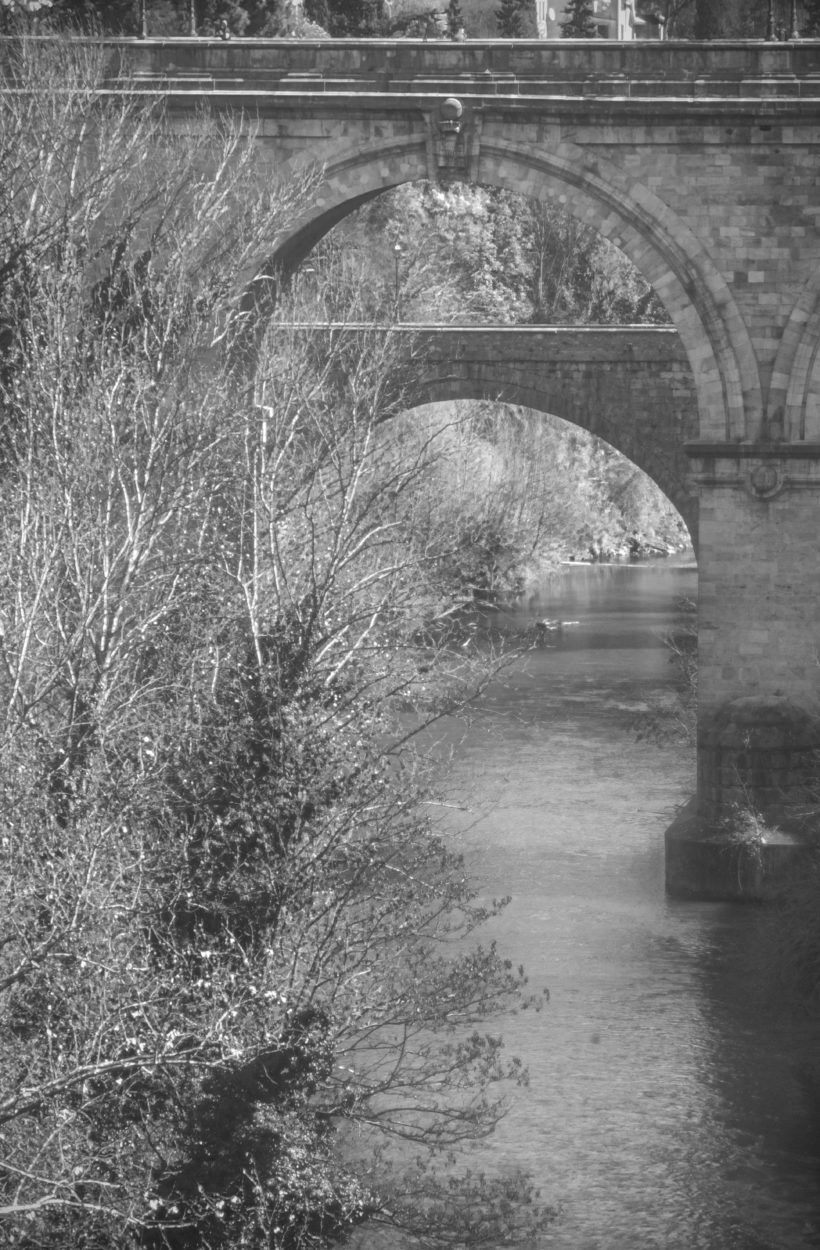 Bridges over the River Tronto