When preparing a Blog, I find myself sorting through the range of experiences we are having and trying to decide if any of them might make more interesting ground to be explored through writing. But never in my wildest imaginings had I considered the possibility that all our lives were about to have to deal with such a radical change brought on by a pandemic. I know we are not alone in feeling what we are currently confronting globally, seems surreal. Culturally, we are a people who celebrate ‘being in charge’, and now we are cowering in place in an effort to protect ourselves from something we can’t see.

Mass biological calamities are not total strangers in a world brought in closer proximity through commercial globalization. No longer is it possible to ignore a serious disease outbreak in a remote corner of the world. The rapid, intercontinental exchange of people and goods ensures what happens elsewhere, doesn’t stay elsewhere. Scourges like Ebola, SARs and AIDs were identified and the likelihood of affecting human populations over wide areas was, in due course, understood and responded to in time to increase the effectiveness of the response. But something seems different this time with the COVID-19 outbreak.

It is too early in this experience to understand the complex factors affecting the devastating effect this viral outbreak is causing. Standing in the midst of a crisis is not the best vantage point for perspective. But several components might be considered. Of course, there is the unique makeup of this strain of virus that was insufficiently understood. More on that in a moment. In addition, it is difficult to escape the perception that some politically fixated objectives seriously complicated timely, accurate assessment as to what the world was too soon to be confronting.

In an authoritarian regime such as China, there is an institutional aversion to be a source of ‘bad news’ the regime would prefer to not have to deal with. The ingrained propensity of authoritarians to ‘kill the messenger of bad news’ does not encourage timely dissemination of critical information that needs to be confronted. Valuable time was lost both in the initial assessment of COVID-19 biohazard but also disseminating the information more widely until containing news of the exponential spread was impossible. Just as animals in the wild seek to hide their vulnerabilities when injured, so do governments.

It also appears in the West, as the initial implications of a possible epidemic began to become apparent, there was a partial paralysis as political leadership attempted to weigh the risks of being held responsible for negative consequences to fragile economies that would likely result by following social isolation strategies recommended by epidemiologists.  As the virus multiplied, critical time was lost. That political factor was not only evident here in Italy in the early stages of the outbreak, it was also very evident in the U.S. and to some extent, as of this writing, is still continuing in that environment of extreme political polarization.

Italy found itself criticized when it came to the initial, public health response to a pandemic. Retrospectively, Italians would acknowledge some miscalculations were made in the early experience with the COVID-19 virus. However, Italy had the misfortune to be on the front end of the exposure to the malady before lessons could be better absorbed from how this particular virus differed from previous viral encounters.

There is an additional problem in using the collective noun, ‘Italy’. There is a suggestion of a monolith. This long, somewhat narrow landmass jutting into the Mediterranean Sea is actually diverse, not only in geographic features, but to some extent, culturally. As a result, the COVID-19 epidemic has not had the same impact throughout the country. From the pattern of the outbreak of identified COVID-19 cases, some three-fifths of all cases reported in all of Italy are concentrated in the Lombardy Region and the bulk of them in the immediate area around Milan.

Milan is the international business hub of Italy. While Rome is the administrative, governmental capital of Italy, it is in the more industrialized and commercialized north of Italy where international trade dominates. With globalization and the rapid expansion of Asian economic activity, Milan has largely become the Italian global trade interface. Before this crisis, in any given week in Milan, a number of international trade shows were taking place many with significant Asian representation. Additionally, in the leadup to the viral outbreak, there had been cultural events promoting closer ties between the EU and Mainland China. This took place before the epidemiologic realities of the COVID-19 virus were adequately understood.

It became apparent only after the initial wave of infections were diagnosed that significantly different epidemiological factors were in operation. Unlike much of previous experience with viral waves, the COVID-19 had a much longer incubation period prior to the onset of diagnosable symptoms. Seriously compounding the viral containment factor was that people exposed to the virus were carriers while appearing to be asymptomatic. In a densely populated urban environment with a highly interactive population engaged in a vibrant commercial activity, rapid rates of exponential contamination were inevitable.

Adding to the epidemiological nightmare, Italians are some of the most physically demonstrative, socially active people you are likely to encounter. That is not a formula for infectious containment.  Adding to the vulnerability profile is Italy has one of the highest percentages of its total population represented by people over aged 60. The obvious reality is that an older aged population cohort will also represent a higher percentage of people with potentially compromising, underlying health issues. Hence, the implications for higher rates of morbidity.

Probably one of the factors accounting for the higher percentage of people representing the later stages of life in Italy is the ready access of the Italian population to a high standard of healthcare totally indifferent to the issue of personal economic status. Many Americans find it difficult to accept that the Healthcare system in Italy is rated by the World Health Organization, based on positive health outcomes, to be superior to the healthcare system in the United States.

I have a conviction, grounded in personal experience, that another positive factor for increased longevity in Italy is overall quality of life. The reduction in anxiety based on access to competent and available healthcare without fear of devastating economic consequences is a definite source for stress reduction. But it goes beyond that. Embedded in this Blog are our observations that societal priorities here seem relatively less preoccupied by material consumerism and more prioritized on a community ‘common good’.  At its core, our overall sense of our lives here is one of general contentment, lower stress and pleasant stimulation – – or at least until very recently.

Family and friends have been very generous in contacting us to ask how we are doing. There is little doubt that the headlines illuminating the high public health impact initially experienced in Northern Italy was a factor in generating anxiety for our welfare. We are, and have been, sheltering in place. To the best of our knowledge, we have not been exposed and the identification of active cases is much lower here than in the more affected north. In short, we are OK. Paradoxically, it is us who are more concerned about many of you in the U.S. as this scourge progresses. As I write, the total identified cases of the COVID-19 infection in the U.S. is the largest in the world. In coming days, we are not likely to see a change in that trend.

How is the mandated social isolation affecting us? By late February there were indications that a serious public health issue was developing. As in New Orleans, this viral issue was increasing during the period of Mardis Gras, or Carnevale as it is celebrated here. Our merry expat band had rented a space in a local restaurant for a Carnevale party. An unforeseen consequence of that decision, made before the viral situation was known, reduced our broader social interactions at least for that event. During Carnevale the main squares are jammed with people, many of them visitors. As the early speculations of what might come materialized, because of my perceived heightened age group vulnerability, I stayed home. Arlene joined some of the ladies for a very brief exposure to the festivities, but about that time, we began a more restrictive social isolation.

We were essentially in voluntary social isolation about a week before the mandated measures for social isolation began to be put into place. As I write this piece, I have been in social isolation for over three weeks. The exception to social isolation for me is my lovely wife. Under the current procedures, only one of us is permitted to go to the local food stores and pharmacies. However, a signed, self-declaration has to be carried stating the justifiable reason for being out of our home. Violators are subject to a serious fine. At the food store, a line forms outside, maintaining social distance and only a few people are permitted to be inside at any given moment. To date, we see no serious evidence of hoarding. Fresh, locally grown food and other staples remain adequately available. 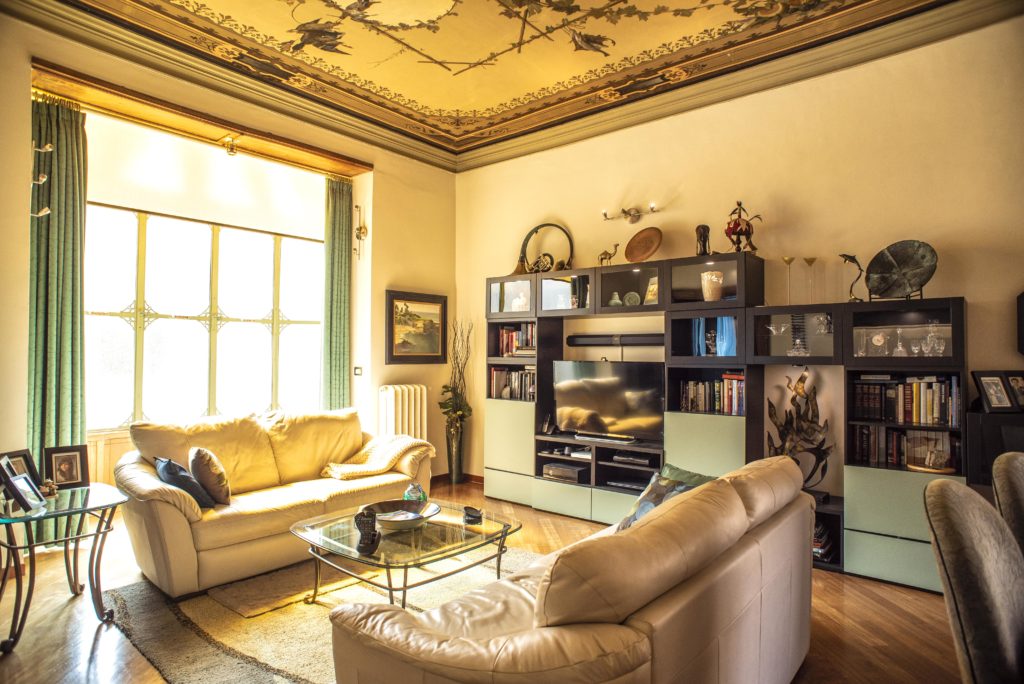 A corner of our living room in ‘isolation space’.

There is something to be said for having an adequately sized apartment in a time like this. We consider we have a high level of social compatibility but why push our luck. We have instituted some instinctive, moderated social distancing. Perhaps an art to maintained togetherness as a spatially confined couple is to enhance a little individual territorial space and privacy. Arlene has been keeping busy preparing excellent culinary presentations. Once we are past this crisis, I have little doubt a serious round of dieting and exercise is going to be necessary. Perhaps another governmental decree might be promulgated, but that would only ensure the Italians wouldn’t do it. Unfortunately, electronic social media is a poor substitute for her more extraverted personality. I’m catching up on household projects. And I generally retreat to my ‘man cave’ surfing the Internet and catching up on reading.

We had planned a late April trip to London to see Hamilton and the Book of Mormon. The UK is in process of finally shutting down and flights have been cancelled due to travel restrictions. The potential for refunds is yet to be ironed out.

As of this moment, public health officials are cautioning that the peak in cases has probably not yet occurred and there is already discussion of a potential for re-infection once the social isolation regime is relaxed as it must eventually be. Americans are not known to being comfortable when not feeling in charge of something. It seems that potential source of comfort is going to take a while.

Adding to the sense of the surreal, currently in our first week of what is astronomically defined as Spring, we have been having snow fall. We saw snow in the higher elevations during winter but didn’t experience any here in town. But we now have had a few days of flurries that soon melt. What next? – I dare not ask!