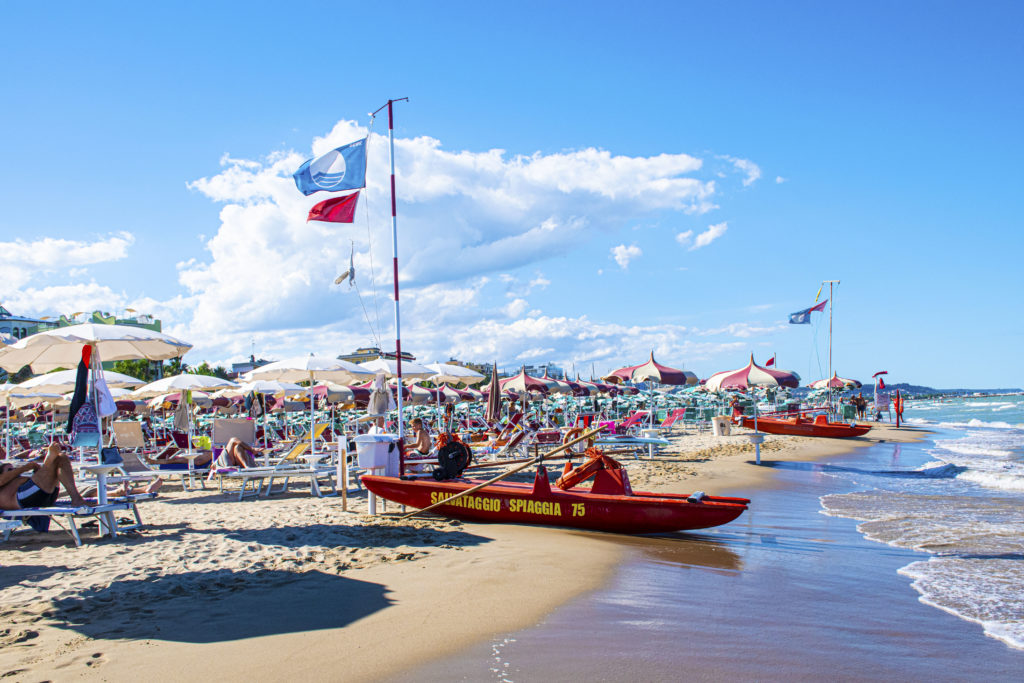 Summer on the Adriatic Sea

A pandemic, like anything unwelcome and unanticipated, has a way of upsetting how we go about our lives. We haven’t posted much for a while. It isn’t that the process of reflecting on what has been happening wasn’t going on. The problem has been, not knowing how to say anything coherent about it.

With the last Blog entry this Spring, it had become evident a worldwide viral contagion, a pandemic, was in process of making radical changes to all our lives. The ground under us was suddenly becoming very unfamiliar. And with it, confidence eroded in the ability to make viable plans. Apprehension of the unknown, replaced a capacity for positive anticipation. An awareness was  forced on us of the fragile nature of life. A deeper perception of our vulnerabilities has been an understanding we were not well prepared to confront.

The initial stages of viral contagion began to spread more rapidly than world-wide health resources were able to adequately understand and mount an effective response. Italy was caught off guard. Earlier mass gatherings in northern Italy, at a critical time in the infection cycle, resulted in serious public health issues. Although currently, that situation is under much better control.

The Province of Ascoli Piceno, where we live, is in the Marche Region. This area is a more rural and self-sufficient part of Italy, less densely populated than the more highly commercial, globally interactive north of the country. We often use the phrase, off the beaten track, to refer to this area. During a pandemic, that factor appears to have become a valuable asset.

The governing authorities of the Marche Region were among the first in Italy to take appropriate, decisive action to reduce the potential spread of the viral contagion. The result has been, this Province has had one of the lower viral infection and mortality rates compared to much of Italy. As of this writing, we continue to be in that more favorable position.

At the time of the last Blog entry, we had already been in an enforced ‘lock down’ restricting social interaction. The initial very restrictive lockdown lasted the better part of three months. That was followed by some very cautious, incremental lifting of restrictions on the amount of personal freedom of movement. Mask wearing and social distancing were, initially, very strictly enforced including with the imposition of fines for non-compliance.

As to how we faired under lockdown, perhaps being ‘retirees’, we had already been used to a less structured and involved, interactive routine. And fortunately, after all these years, we still enjoy each other’s company. Plus, our rented apartment is large enough to afford some separated personal space use. As a result, we seem to have come through the more restrictive social hibernation as well as could be hoped. And very fortunately, we remain healthy and viral infection free.

As far as perceptions of the response of the larger community, Italians are not generally known to be the most compliant people in the world. A decided ‘Libertarian’ predisposition is hard to miss in everyday life.  However, in moments of challenge, a sense of community connectedness surfaces and caring for ‘others’ kicks in. And so, as to be expected, as restrictions are being relaxed, Italians are relieved to have more freedom. Consistent mask wearing, and social distancing have suffered as a result.

While reduced, there has been some summer seasonal influx of vacationing tourists. Although this year, the impact of tourism has consisted mostly of other Italians. This has further increased mask and social distancing non-compliance and added more potential contagion exposure vectors.  The natural concern here, as elsewhere, is an increase in a potential post summer infection case rate. As of this writing, there appears to be some evidence, a feared, general viral resurgence may have begun. But here in Italy, high rates of testing availability has been a key factor in controlling this malady.

As I sit at the keyboard, the summer season in Italy is in process of wrapping up. And not only is a pandemic still monopolizing how we go about our lives, but it is time to adjust to the transition out of summer. Personally, I’m not quite ready to say goodbye to summer. My inner self is still feeling a desire for the more comforting warmth from the sun. Summer seems like a time it is easier to pretend to be more relaxed and carefree. But it felt as though there was a little less of that this year. If anything, there was a preoccupation to figure out how to best go forward in unsure times.

Ascoli has had its own break from the familiar this summer. Mid-summer in Ascoli is normally filled with the sights and sounds of the annual Quintana medieval re-enactment festival, with the accompanying crowds of spectators. After protracted discussions, the reluctant decision was reached to cancel this year’s events.  Not only is the Quintana an important part of the pulse of the community, the influx of tourism has been very important to the economic life of Ascoli just as tourism is an important component of the overall Italian economy.

Italy has enjoyed a position as a desirable travel destination for centuries.  Mass tourism, regardless of its negative cultural side-effects, has been important in providing an income stream and sources for employment.  The necessary restrictions imposed by the pandemic have dealt a blow to the economic impact of tourism in Italy as well as elsewhere.  The restrictions on American tourism during the pandemic have also been apparent including here in Ascoli Piceno. There has been an absence during the summer of the occasional sound of American inflected English in the Piazzas of Ascoli.

Ascoli was already in some economic distress in the aftermath of a series of earthquakes in 2016. Ascoli faired far better than towns nearer the quake epicenters in the Apennines further west. But as a Provincial Capital, Ascoli has been a center for economic and busines activity for the area. Still in the early stages of the slow recovery from the economic consequences of the seismic tremors, the pandemic has dealt a further economic blow. The effects of forced shutdowns and resulting reduced tourism are in evidence with several small businesses that have closed and not likely to reopen.

The Italians have a well-deserved positive reputation that includes a refined and highly developed gastronomy and an affinity for social connectedness. To dine well with others, is to live well. Eating establishments of all kinds are an important element of Italian life. Taking advantage of comfortable summer temperatures, the officials of Ascoli have authorized restaurants and other eating establishments to expand their table seating areas into outdoor, public spaces. This has been accommodated while observing increased table placement, social distancing in the less problematic open air contagion environment.

Here in the historic central area of Ascoli, most of these older structures do not accommodate large volume, interior spaces.  Summer weather use of more expansive external space has been very beneficial for restaurants to sustain customer volume. With the onset of increasingly colder weather, it will become necessary to shift dining to indoors. The mandatory social distancing requirements between tables reduces useable interior restaurant customer space capacity. It remains to be seen if using more limited, interior dinning space, is going to be economically viable for some smaller restaurants. 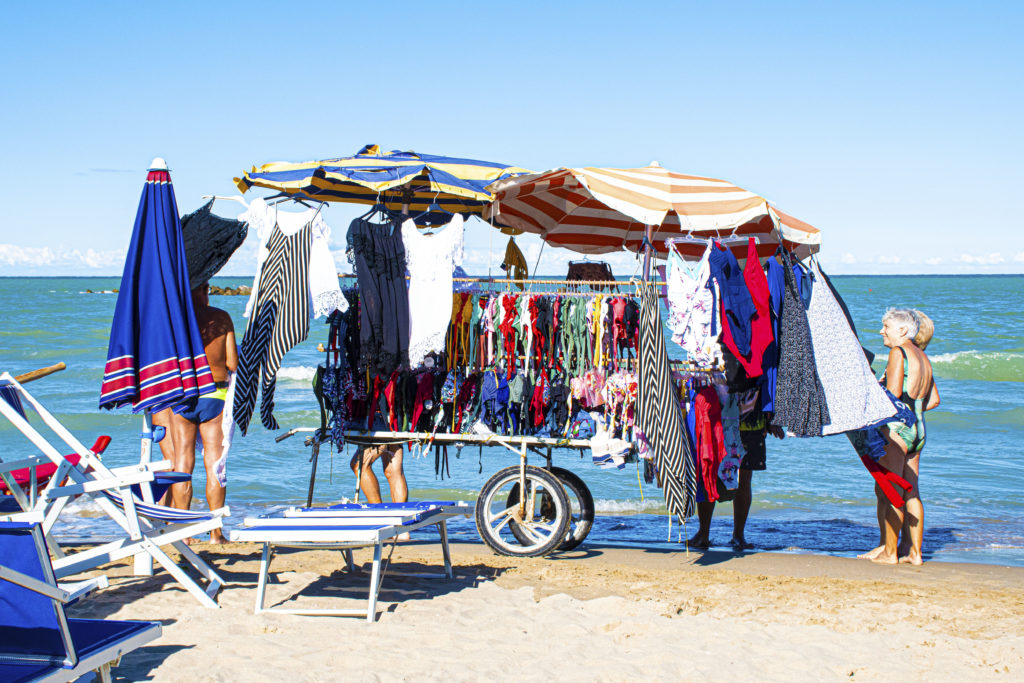 In mid-August, Ferragosto takes place. It is the summer vacation holiday that tradition has it, was established by the Emperor Augustus in the first century of the common era. Perhaps the more northern latitude of Italy, compared to the southern United States, may advance an Autumn seasonal transition. For me, Ferragosto, in mid-August, seems very similar to the perception of Labor Day, in early September in the U.S. in marking the virtual end of summer and beginning of the transition into fall.

Against all that has changed, we have been clinging to what we can of the familiar. Drawing on her upbringing with summers spent on the sand at Virginia Beach, Arlene finds pleasant support spending as much time as she can on the sandy beach at nearby San Benedetto del Tronto. As we have for the past three summers, we rent a spot at a concession on the Adriatic Sea less than a half hour drive from here. This special spot on the Adriatic includes a small table with a sun umbrella and two lounges. The dedicated spaces can be rented for the season and are placed two meters apart in response to social distancing guidelines. The concession is well managed and has ample facilities including for the enjoyment of a seafood meal.

Our seasonal spot is only some ten meters from the water. Speaking of which, the Adriatic has more the feel for me of a very large, placid lake but with the wide, broad arc of the horizon readily in view. Despite having a latitude of 42 degrees north, the water in summer is quite mild and clear. The overall beach atmosphere is very positive with entire families enjoying the time together. There is an absence of the ‘kitsch’ boardwalk feel I recall from my youth on the beaches in New York City. Several of our expatriate friends, who have also migrated to Ascoli, have rented nearby spots on the same beach resulting in a cluster of transplants on the sand.

We recently acquired a couple of folding bicycles that we can transport in our diminutive, 2005 Fiat Panda. Riding a bike on the busy, narrow streets of Ascoli is not for the faint of heart. Our plan in the coming Autumn is to take our bikes to the path along the Adriatic north of San Benedetto to enjoy the sea air from that vantage point. And a wooded park area in the foothills just outside Ascoli provides further options for refreshing, outdoor exercise.

Suffice it to say, the generally negative civil tone emanating from America, on top of contenting with a pandemic and the resulting economic stresses, is not conducive to a tranquil retirement. As in the case of most all of us individually and collectively as an American culture, there exists the inherent possibility to bring out a potentially, better self in all of us. Our hope is that the higher potential of our better selves, rises to the occasion.

In the meantime, we remain convinced we made the best possible decision for this time in our lives to have come here. We continue to enjoy the multiple benefits of being in the process of becoming more fully integrated into this vibrant culture. To have the benefit of being an American, with the blessings our circumstances afforded, and to be here, being so openly accepted and being enriched with all this culture has to offer, is the best of all consequences. Pandemics notwithstanding, we continue to feel blessed.

Please stay safe and join us in pursuing a better tomorrow for everyone.