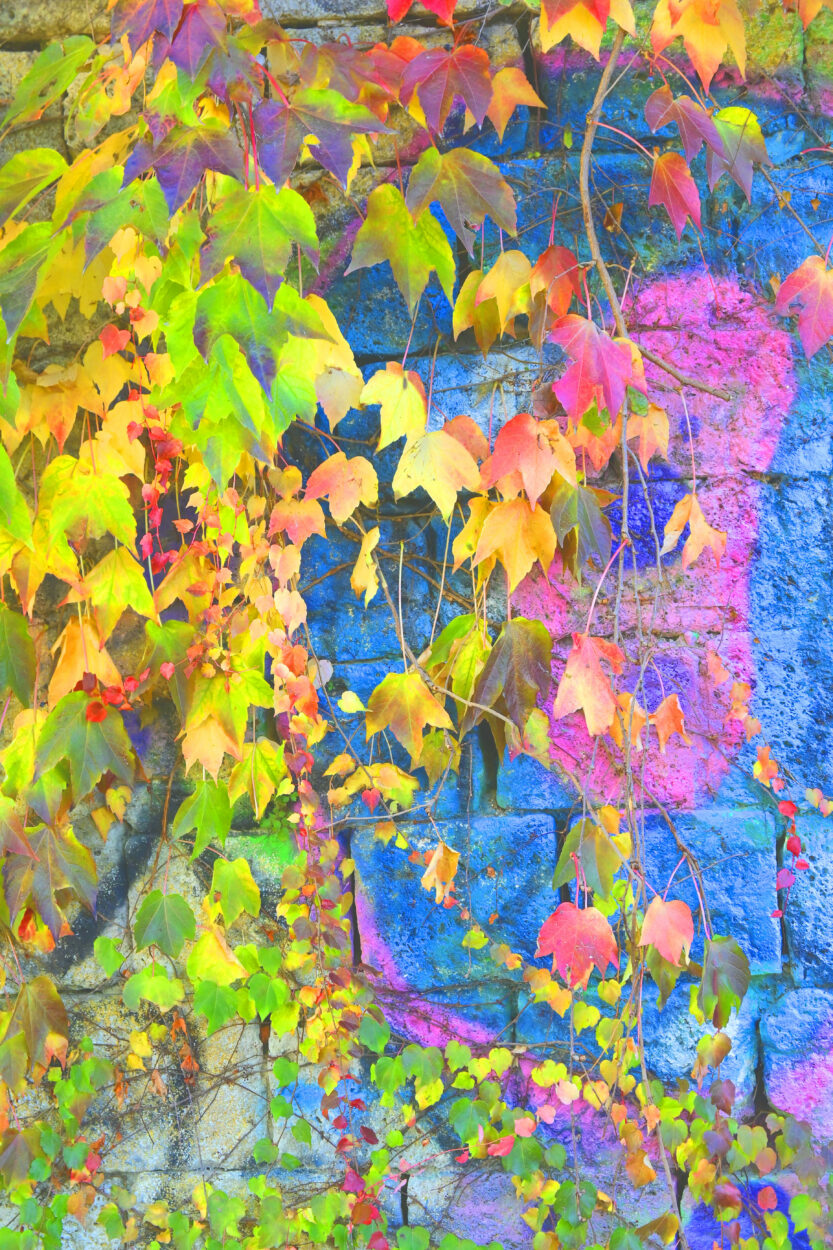 Autmn leaves on an ancient stone wall – an interpretation.

It has been some time since our last Blog entry. A lack of interest and desire to share thoughts has not been a factor. Now going on ten years since our arrival in Ascoli to take up residence, our conviction this was the right thing for us to do remains unwavering.

It seems the accumulated perceptions of the course of looming world events has left us unclear how to make much sense of it all. Rest assured, we are not going into a recitation of the multiple sources of concern and anxiety that touch on too many of our lives. Most of us are already too aware of that onslaught.

At core, what we wanted to do in starting out in a new exploration by coming to Italy, continues to be stimulating and rewarding. That was not an easy decision particularly in this late stage of our lives.  A problem for me is to be unavoidably aware of the multiple challenges we all are currently facing while giving an accurate, positive reflection of our experience here in Ascoli. Remaining positive in this reporting without sounding like a Pollyanna, is not something I’m sure I know how to do very well. But I’m going to give it a try.

When we last wrote, we were anticipating a positive summer experience. High in that expectation was not only returning for a sixth time to a concession on the sand beach of the Adriatic Sea, but cultural life in Ascoli seemed to be also regaining some of its vitality. We weren’t disappointed in our experience of summer particularly since the refreshing outdoor sun and warm breezes added a sense of security to small gatherings of our Italian and Expat friends. The social isolation that the COVID environment involved had long since gotten old.

Those familiar with this Blog recall we enjoy a dedicated, entire summer season, rental space on the Adriatic shore sand furnished with a small table and its sun umbrella plus two reclining lounges. The places on the sand are organized by regulated spacing distances that afford some health recommended distancing comfort, plus a bit of privacy. This season, a small grouping of five spaces, divided between adjacent rows, had also been reserved by some of our Italian and Expat friends. For us, the beach is enjoyed not only for its own merits but has become also socially reinforcing.

Additionally, we are not fans of mass tourism. It is an ambiguous feeling in that we support having people’s lives enriched with the cultural depth that is so accessible in Italy and the economy here certainly benefits. But, too frequently, visits at culturally rich places during summer peak tourism, are marred by large, and unfortunately at times, unruly crowds. A reality of living here is we can go to Italian cultural sites off-season and avoid jostling crowds. During peak summer tourist periods, we opt for the serenity of the Adriatic shore and will leave the summer tourist crowds for others to deal with.

And then there has been a welcome rejuvenation of the cultural life of Ascoli. As soon as we arrived in Ascoli back in 2013, we were amazed not only at the variety of cultural offerings but their quality. The arts have long thrived on this peninsula and the resulting depth and maturity of that reality is delightfully apparent.

There has also been a welcome return of a variety of food and wine festivals in the principal piazzas. Early in the morning that it opened, I appeared at the chocolate festival. Life, after all, is about establishing priorities. 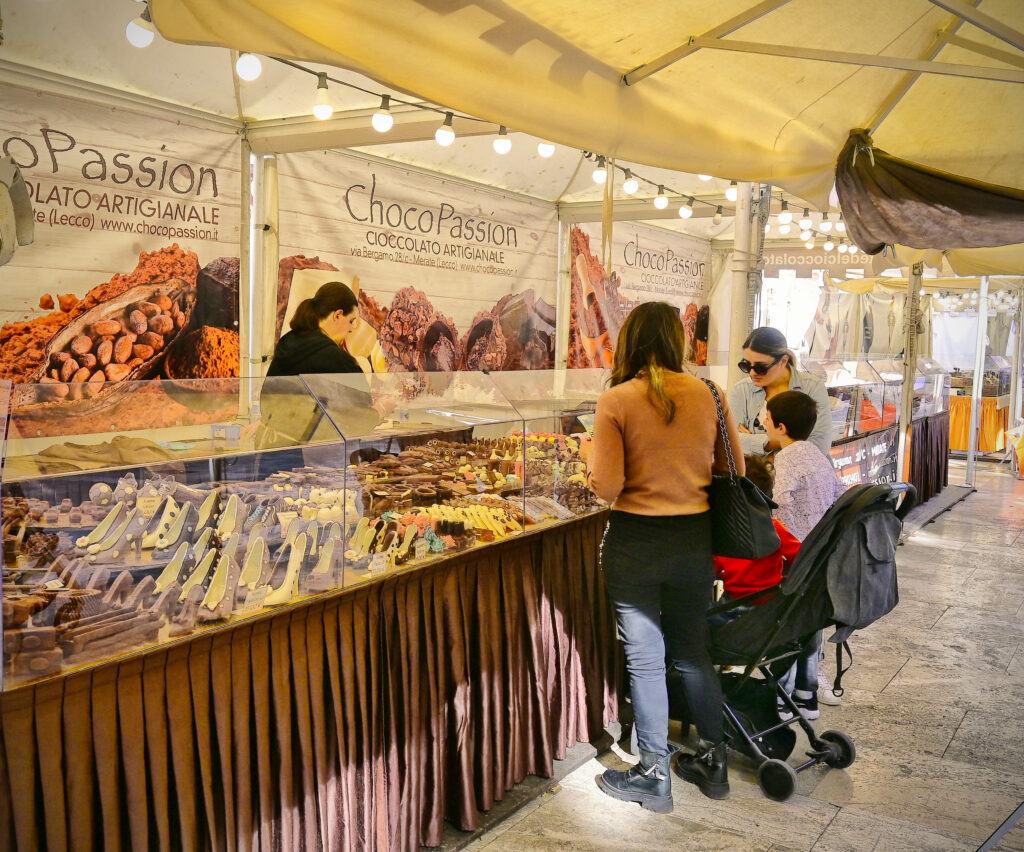 Chocolate offerings in every imaginable shape.

A major event on the Ascoli summer calendar has been the medieval reenactment pageant of the Quintana. In response to the COVID menace, recent years have seen a serious curtailment of this series of significant events. This year, a much-reinvigorated Quintana was back. However, some COVID avoidance measures were in effect this year compared to earlier years.

In the past, there had been a major gathering in the Piazza Ventidio Basso of a very large number of participants being organized into the medieval costumed procession through Ascoli. The informal, joyous energy of these participants, as the large group intermingled in the piazza, was not only infectious, but it was also an experience that I enthusiastically immersed myself into, camera in hand. In the totally authentic setting among people attired in accurate medieval costumes, it was an easy flight of fancy to imagine myself as a spectator back over 700 years.

This year, the marching contingents were organized into their respective units, in different places, kept separate and then converged into a carefully choreographed sequence to take their respective positions in the procession. That significantly reduced the variety of my photographic exposure to the various units but did not eliminate it.

Another indication of an improving COVID environment is to have enjoyed a repeat visit from the U.S. by a special friend of many years. After a relaxing stay with us, she and Arlene spent several days enjoying “girl time” in Rome. I fortunately had our now twenty-month-old canine companion to take very good care of me in Arlene’s absence. He continues to be special addition to our lives and motivates us to get out for several accompanied walks through Ascoli. The physical and emotional exercise are unquestionably beneficial to all the participants.

The current relative improvement in COVID infection vulnerability, has no doubt been influenced by the over 80% full vaccination status of the Italians. In celebration of a quasi-return to normalcy, we decided to host the Thanksgiving gathering at our home this year after an imposed isolation break during the peak of the COVID cases. This year’s Thanksgiving involved a dozen of our Italian and Expat friends. It is one more of the American imported traditions that Italians find both interesting and pleasant to enjoy with the rest of us. We thrive in each other’s company to begin with. But sharing a family-type experience after being denied it, made the event even more special.

And what is going on in Ascoli these days? In response to the complex challenges of the times, the Ascolani have not been passive. Ever looking to the long-term outlook, the Italians have engaged on a program of capital injection into communities centered on improvement to existing structures. A tax incentive system subsidizes building improvement projects including increased energy efficiency and structural improvements identified as necessary. As in most major government programs, there are complex consequences.

Here in the historic center of Ascoli, many of the existing structures, such as the one in which we live, date back to the sixteenth century. They are primarily constructed on cores of travertine stone, locally quarried. In some cases, buildings reincorporate finished stone blocks which originated in Roman-era construction which had fallen into disuse.

Additionally, Italy is a seismically active environment.  The upsurge of the earth’s crust that formed the Apennine Mountain Range, the spine running much of the Italian Peninsula, is understood to be the result of the forces of the Europe-Asian and the African earth moving crustal elements interacting.

In 2016, there were a series of more consequential earthquakes in the area along the Apennines some 30-40 kilometers west of Ascoli. Villages in the mountain areas built in more primitive, unreinforced methods, were seriously damaged. Here in Ascoli, there was generally minimal, superficial damage although some structures were declared to be no longer safe for habitation largely out of concern for potential after-shock damage to weakened structures. Our building had very minor and superficial damage to thick plaster finishes over the travertine structural stone. We felt the jolts of the 2016 quakes but remained in our apartment.

Recently, there have been a series of tremors located in the Adriatic Seabed some nearly 100 kilometers north of us. Friends in Ascoli say they we aware of some of the quakes but had no damage. There seems to be something unique about the bedrock connection of the foundation of the structure we live in that we have felt absolutely nothing of this seismic activity.

There is no doubt the infrastructure improvements will enhance the viability of the communities involved over the long run. But in the present interim, with these often-major projects going on all over town, there are current disruptions to daily life. A not insignificant number of people have had to move out of their homes while the lengthy structural reinforcement work takes place. That has made a serious drain on currently available housing which will gradually improve as people are able to move back into their own homes.

And there have also been disruptions to various small business that had been functioning in these buildings currently under renovation. There is concern that some percentage of them will not remain viable. Then there is the traffic disruption including previously pedestrian only areas now also being used by vehicles. The promising long-term benefits involving the current disruptions also involve some immediate negative consequences. That makes for a very difficult political question to balance. I’m glad I don’t have to be part of it.

Speaking of the political, there is something pleasantly reassuring that in Ascoli, you can encounter the mayor going about his daily life, just as you do and stop and have a chat. There is a lot to be said for a simpler life. 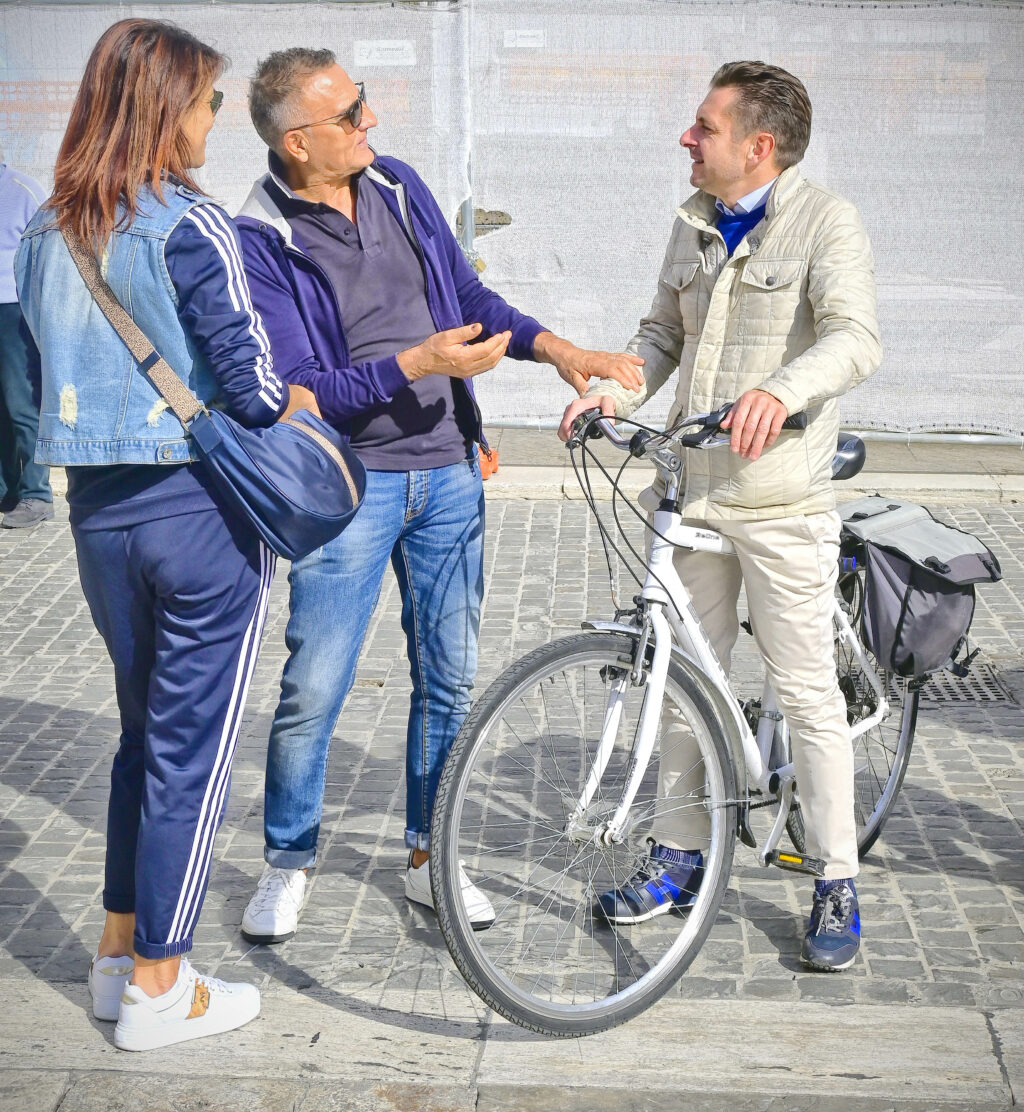 The Mayor of Ascoli, on his bike, conferring with constituents

Some early signs of Christmas have been showing up in some of the stores and every year it seems to start appearing earlier on the calendar. The commune has just started putting up festive lighting components in preparation for their being lighted later. But it is never anything like the U.S. Our household tradition is to wait until just after Thanksgiving to transition to Christmas decorations. Although nominally a predominantly Roman Catholic country, Italy is, by-and-large secular. But many Italians adhere to the calendar of the church and do not officially start the Christmas observance until the 8th of December, marking the Immaculate Conception of the Virgin Mary according to church dogma. And then, Christmas decorations remain up until into January marking the traditional 12th day of Christmas with the observance of Epiphany, the visit of the Wise Men. In contrast, in the U.S., we recall the sad, anti-climactic sight of Christmas trees out at the curb on the day immediately after Christmas.

Life is unavoidably about adapting to change. It seems in recent times; we have had to deal with more change, with its challenges, than we might wish.  Optimally, we will, with each other’s help, make the most of the challenges that confront us and move on to a better place.

We certainly hope your Thanksgiving was a pleasant and reinforcing one. It is clear we all can use as much of that as we can get.  Our hope is to be back in touch probably after the holidays.  We want to take this opportunity to wish all of you the most refreshing and safest of Christmases or whatever your holidays entail and a Happy New Year.