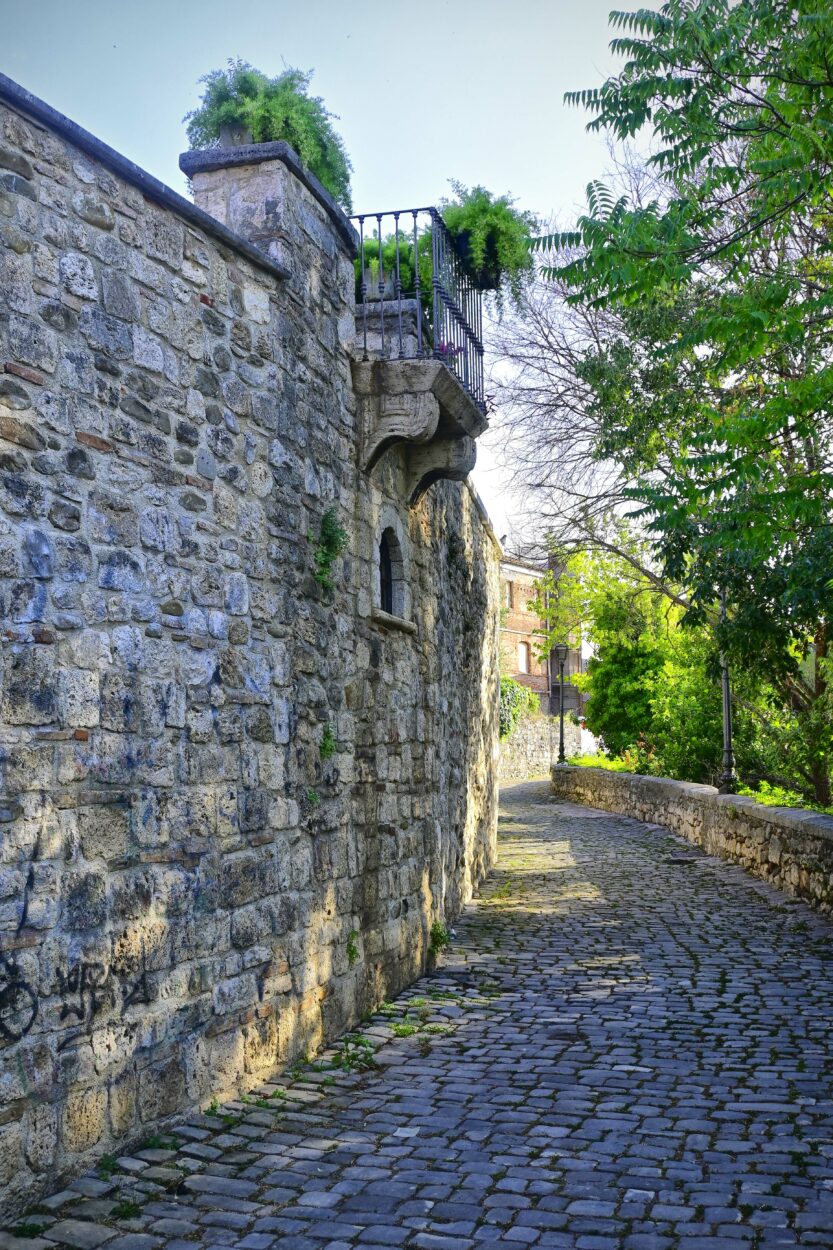 Rue delle Stelle, above the River Tronto, where Cesare takes me for walks.

When I sat down to begin to write this blog entry, it was officially the first day of summer, the Summer Solstice. But here in Central Italy, as far are we are concerned, the calendar pronouncement was running late this year. It has been, from our experience, mid-Summer for nearly a month.

In a repeat of last year, we went through a protracted late winter with chilly, damp days and intermittent showers, until into mid-May. There was a brief period of encouraging warmth around the first official day of Spring in April, but then late winter reasserted itself awhile longer. And then, in short order in mid-May, we went from jackets to mid-summer, shirt sleeves.

For those of us living here in Ascoli Piceno, on the flat flood plain of the river Tronto, even with the western edge of Ascoli inserting itself into the foothills of the Sibillini Mountains, we were spared any serious accumulation of winter snow. We had a day or two of winter snow flurries which soon melted and was never a serious factor in getting around. However, some of the higher slopes around us were snow covered for most of the winter. It made a pleasant, distant backdrop when Cesare, our new canine family member, had me out in the morning sunshine, for my walks. 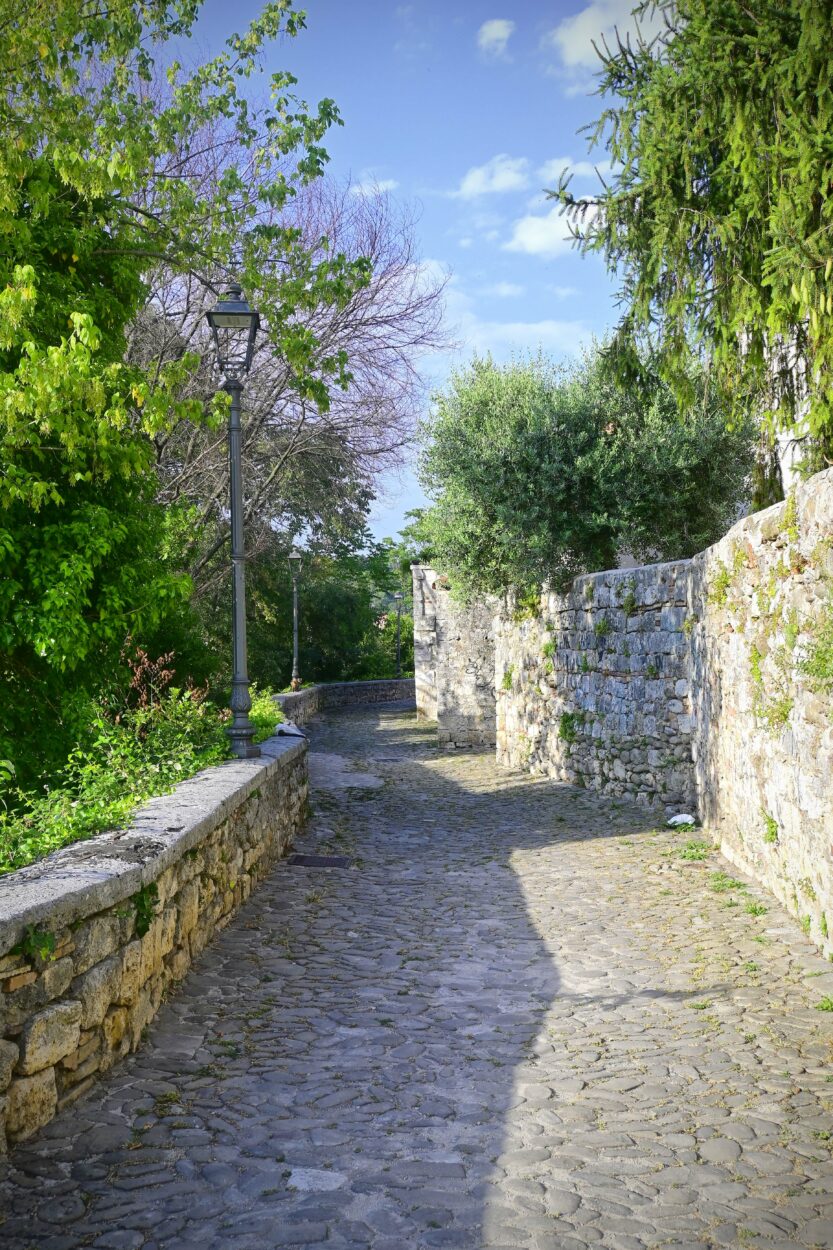 Another portion of the Rue della Stella above the River Tronto where Cesare has decided to take me. 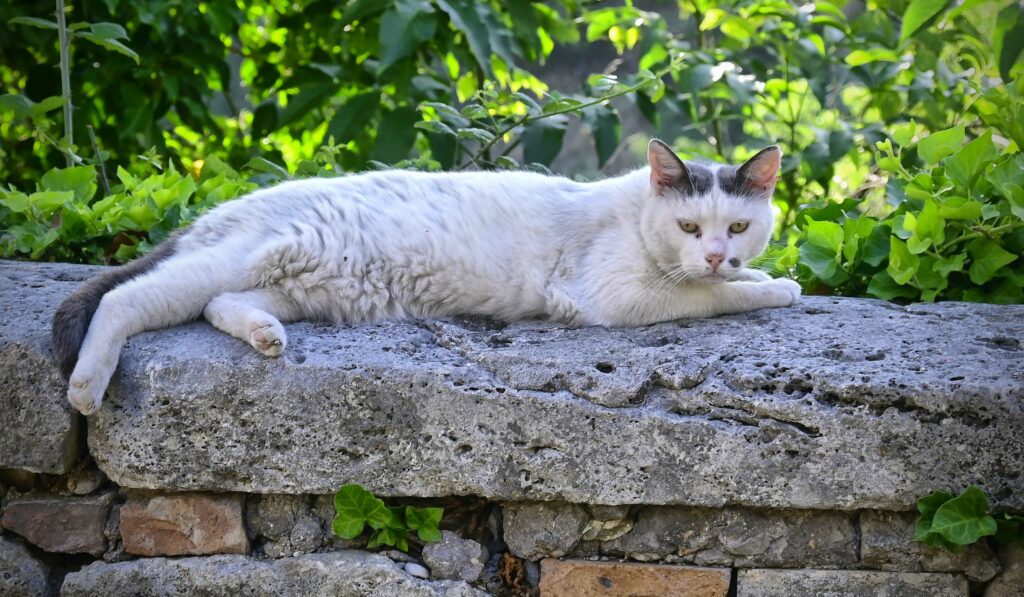 A local resident of Rue della Stelle feeling inhospitable with Cesare coming into his space.

At our stage of life, we are not into winter sports, so we have been content to remain close to the hearth this winter. If I ever had any enthusiasm to drive on winter, potentially snow-covered, two-lane mountain roads, I have lost it. When we replaced our car several years ago, we decided on a single set of warm weather tires kept on the car all year round. We have a set of snow chains in the trunk to be legal if stopped and inspected by the authorities between the middle of October to the middle of April. But the chains have never been out of the package.

Of course, a contributing factor is in this part of Central Italy and the lower altitude where we live, winters are less severe than further north or in the nearby mountains. Even with that consideration, part of the rationale to be in a town of sufficient size is, all our basic needs are more than adequately situated within an easy walking distance of our apartment.

With the insidious anxiety over a COVID virus continually reengineering itself in the background, having an energetically expressive canine source of affection in our lives has become very important. His outgoing temperament has resulted in a bonding that happened very quickly – and life is not the same on several levels.

No more sleeping in and regardless of weather, apartment life means having no backyard of our own so, there are the five accompanied outings per day. And there is no question that the more than an hour and half walking per day has been good for us not only physically, but socially. There are now any number of friendly Italians who know and greet Cesare by name but are not necessarily likely to know ours. In Italy, dogs and small children are social lubricants.

COVID restrictions on social interaction recently moderated with warmer weather making fresh air contact more possible. That has helped relieve a sense of winter isolation. Until recently, Italy has had generally favorable indications of trends as far as new COVID infections and reduced rates of hospitalizations had been promising. Italy is reported to have a higher percentage of vaccinations of the population than some other developed countries.

That is understood to be a favorable factor that had been affecting the severity of hospitalizations and more serious consequences even with the newer viral mutation infections. That positive trend is being watched has as reports are being evaluated of an upsurge of a more virulent new viral mutations. 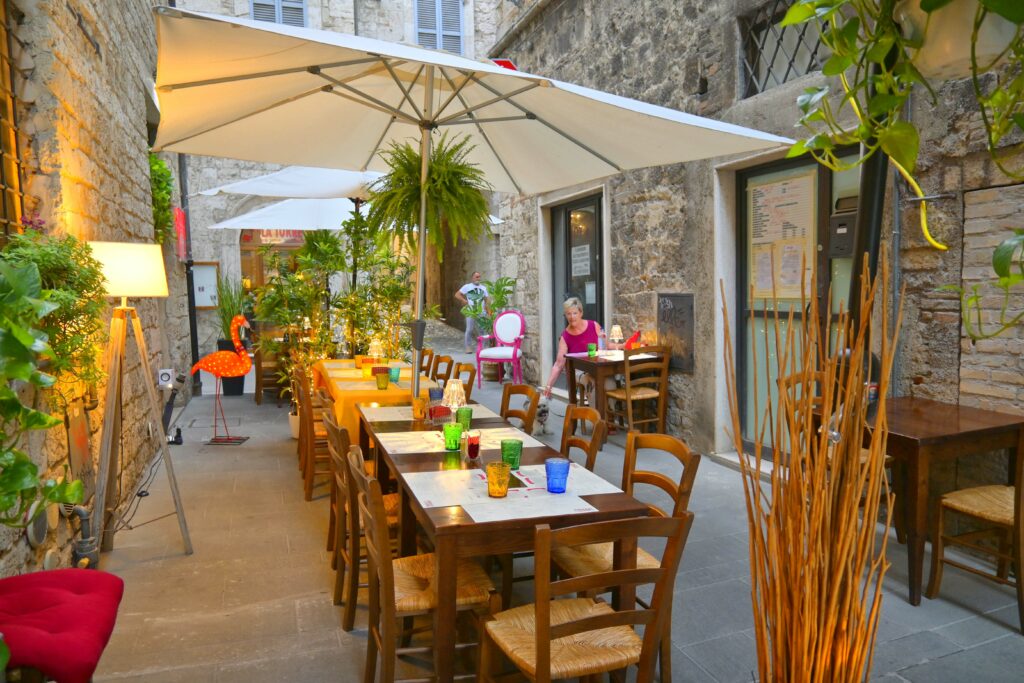 Early arrivals for Cenare (dinner) on an Ascoli street at Angolo di Vino with Cesare in attendance.

For now, the civil authorities here in Ascoli are continuing their COVID relief mitigation measures for businesses and for the encouragement to community life put in place several years ago. One warm weather measure is permitting eating establishments to encroach onto public spaces to set up outdoor tables. This includes not only on the piazzas but also on some city streets. It adds to a sense of positive social informality. I marvel at the dexterity of some of the serving staff who run the gauntlet from the restaurant kitchen across a stream of pedestrian passersby, and in some cases even vehicles.

While writing this Blog entry, we recognized the ninth anniversary of our arrival here to take up permanent residence. In preparing to leave our native country, we considered what we were likely doing was ‘reinventing ourselves’. There have been many expressions on how retirement becomes a different phase of life. It is an opportunity for new explorations. We had a sense that some ‘reinvention’ was what might happen but most of us aren’t all that good at accurate predictions of the future.

Now, in retrospect, we sense we have reinvented ourselves in a few ways. An aspect of the reinvention process is we have a feeling we are continuing to grow and change probably through learning how to better adapt. Our priorities now seem more focused. Being able to be flexible, to adjust and being willing to be not overly tied to past perceptions seems important to making something of the life of becoming an expatriate work.

A factor in our planning was we wanted to avoid becoming imbedded in an ‘American Expat Ghetto’. And, fortunately, that is something we have avoided. The fellow expatriates who have subsequently come here are very generally outward looking. Like us, they appear to be here to have a better feel for what Italy is about. That is hard to do if you want to drag America with you and not let go.

Ascoli Piceno remains a very positive tourist destination. For Italians in particular, and Europeans in general, most have already been to the major World Heritage Italian cultural attractions such as Rome, Florence, Venice and so many others. For them, Ascoli Piceno offers a less mass tourism impacted experience. It is primarily the more ‘seasoned’ American tourist that we will encounter here for whom this a repeat Italian excursion. Some have expressed relief in discovering a more ‘genuine’, less ‘packaged’ and hectic Italy.

Ascoli reflects a long and rich cultural history. However, on many days in the Piazza del Popolo in Ascoli, the locals still outnumber the tourists. And that, to us is a good sign. Just as it has been since in the ninth millennia before the Current Era, Ascoli remains primarily a place inhabited by and enjoyed by the Ascolani. The vibrance of a ‘more real Italy’ seems more accessible here somehow. Just like the laundry hanging from an upper floor balcony clothesline, Ascoli is real, and a rich, actual life goes on here.

The Ascolani have a justifiable sense of pride in this place and tradition is strong here. All around us are the standing remnants of the multiple cultural-historic phases Ascoli has reflected over the centuries. We were delighted in the recent encouraging stage of COVID recovery with various cultural events beginning to get back into full swing. We, and the other Ascolani, are delighted to see much of the pre-COVID cultural life reawaken. The summer vibrance in Ascoli is being enthusiastically welcomed.

One of the most important cultural events is the medieval reenactment of the Quintana. Elsewhere in this Blog there are entries and photos of some of the past, pre-COVID festivities. Some initial events, such as the choreographed flag tossing as well as archery competitions have already begun. The first Corteo, the renaissance costumed procession through the historic district, and the first Quintana Joust are scheduled for this coming weekend. Ascoli is very proud of these spectacular presentations that actually rival events in Siena and Florence.

Above, we commented on an earlier onset of warmer, summer weather. ‘Climate change’ is getting more difficult to deny. This summer, for our sixth summer season, we have returned to the same dedicated space on the sand of the Adriatic Seashore at a commercial operation run by a hotel in that area. That special place on the water is only a half-hour drive from Ascoli. This year, the concession announced an opening date only to advance it, at the last minute by a week responding to an early summer arrival.

June is interesting on the Adriatic shore including this year. People’s lives seem to conform to patterns and most arrivals from elsewhere to enjoy the Adriatic sun and shore have been programmed to come later in the season. The earlier onset of real summer hasn’t yet been accommodated into some people’s lives it seems. 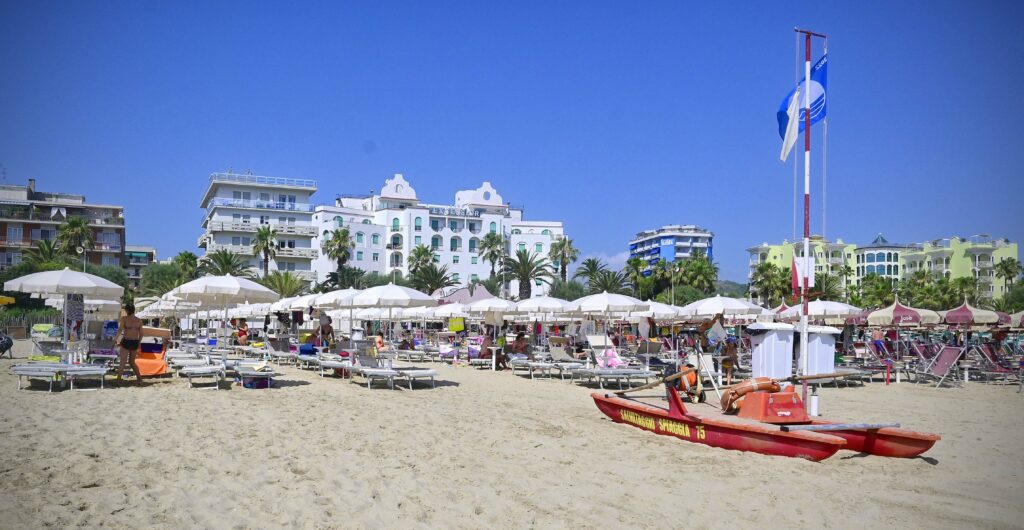 On the sand at the Adriatic shore. A warm sunny June with a very underutilized beach, for now.

As a result, the hotel associated with ‘our beach’, is not yet as heavily booked as it will be later. So, the portion of the beach operated by the hotel we enjoy is also pleasantly underutilized, for now. But that will soon change.

Either a prayer meeting prior to a group baptism by emersion in the Adriatic, – or – The morning Aqua Gym session doing ‘YMCA’.

Having a more active beach is not all bad. We still hope to get reacquainted with some beach ‘regulars’ from elsewhere in Europe we have come to know, that past COVID restrictions have kept away. We look forward to renewing those additional positive expansions in our lives.

For many of us, the last several years have brought challenges and disappointments. Against that backdrop, any evidence of positivity and something to feel joyous about feels welcome.  To live in any community in close association with others is to experience positive, mutual reaffirmation. That also includes mutual support in times of deep sorrow and disappointment. But as the song goes, “That’s what friends are for”.

These realities have brought into sharper focus the necessity to not retreat into denial of misfortune, but to be more consciously aware of that  good fortune we still have – and to share that positive reality with others. Living is complex and multi-faceted. It seems, how we chose to live it and in what fashion, can be still largely up to us.