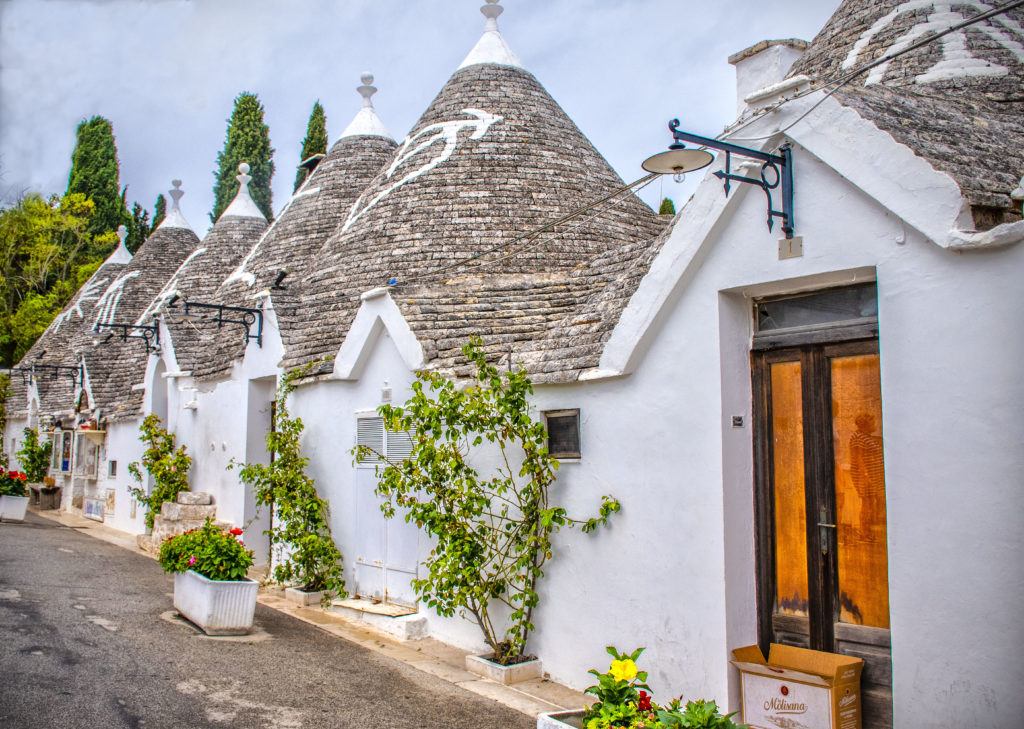 On the road at Alberobello, Puglia. A row of ‘Trulli’.

Autumn has arrived in Ascoli. Right on schedule, with the Autumn Equinox on the 22nd of September, the air started to cool. No more going out without a light jacket. Mostly sunny days began to give way to more frequent afternoon rain showers. The wind also began to pick up signaling changes were underway. At night, the faint smell of fireplace wood smoke is now apparent in the air.

Also as predicted, the Fall has brought with it an increase in the number of COVID-19 reported new cases. This trend is being reflected worldwide and of course, Ascoli has not been spared. However, the situation continues to be relative. During the Summer, the Province of Ascoli Piceno reported generally fewer new viral cases than elsewhere. Now in October, this Province, while seeing an untick, is currently reporting fewer new cases daily than some other areas. Unfortunately, a disproportionate percentage of the new cases appear to be connected to the return to in-person school classes.

Italy was criticized in the initial stages of the contagion. Mass attendance sporting events in Northern Italy, prior to any awareness that a biologic threat was present, resulted in high levels of infection which subsequently overwhelmed the healthcare system. Perhaps, having witnessed what this unforeseen biologic disaster had done to Italy, may have stimulated a more proactive public health response in other countries – at least in those places under the stewardship of more prudent and responsible leadership.

After some initial flailing about searching for solutions for something inadequately understood, Italy got its act together and significantly reduced the rate of viral spread.  The overall result has been Italy has faired much better over the course of this contagion than some other places.

Consistent with the more prudent approach to prioritizing public health taken here, the national leadership has reimposed 24/7 mask wearing and other measures to arrest increasing infection rates. The measures are being reinforced by the imposition of fines. With this writing, the government is imposing curfews, restrictions and closings of some businesses where larger groups of people tend to congregate, becoming viral contagion resurgence ‘hot-spots’.

We are seeing an overall increase in compliance in the general population particularly in mask wearing. However, as expected, some of the younger segments of the population, acting on an inherent belief in indestructability, seem to have been more resistant to compliance. The response by local authorities has been to publicize the arrests and fine impositions to incentivize a readjustment in attitudes.

As we have reported, the sand beach on the nearby Adriatic has been our Summer sanctuary providing an open-air safe- haven reducing potential contagion. It has also been a therapeutic mental health environment in which to attempt to maintain equilibrium when apprehension and anxiety have become a disproportionate part of experience. A condition also being reported by others.

One of our plans was to resume travel, post Summer beach immersion, to further our appreciation of our elective homeland. There is also something to be said for capitalizing on being expatriates to do our exploring after the mass tourism peak has passed. Our previous experience had been generally very favorable in using public transportation in particular the excellent rail system of Trenitalia. But the CORONA Virus has changed that. This is no longer a time to be immersed in higher density, interior space. The solution was obviously to drive ourselves in the private isolation of our own car.

During our initial phase of this expatriate adventure, we attempted to exist without a car in a reversal of our experience as southern Californian, multi-car owners.  In addition to doing more healthy walking, we became very adept with public transportation in its various forms. But while generally functional, a drawback was it severely limited our access to interesting places and experiences ‘off the grid.’ As a result, four years ago we purchased an eleven-year old, very modestly sized, Fiat Panda.  It quickly became an important resource for us. 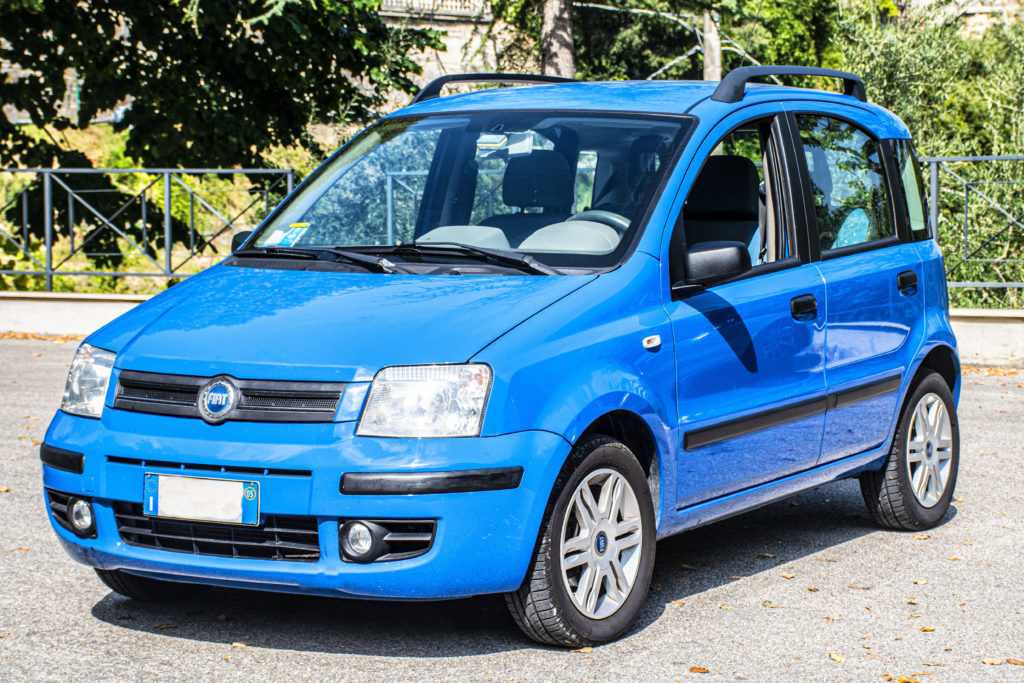 The Panda is designed and advertised as a sub-compact, ‘city-car’. The concept was to facilitate navigation through narrow streets and maneuvering into the always restrictive parking spots. It is as tall as it is wide thus accommodating some logistical hauling tasks.  However, we came to the inevitable conclusion, it was never designed to be an optimal vehicle for long distance road travel. Autostrada speed was not in the design considerations. That perception was reinforced during a trip we made into southern Italy two years ago to accept the kind hospitality of friends to stay with them in their home.

I have always enjoyed driving, as has Arlene. But that over six-hour trip left me very tired and tense. The road stability of the relatively light Panda, with its boxy shape, seemed to  deteriorate at higher speeds. Driving on the Autostrada below the speed limit did not put us in a favorable light with some other drivers who considered us a slower-moving, nuisance. Italian drivers tend to not be overly restrained when it comes to extreme tailgating if they think you are in their way.

Additionally, I have owned a sports car or two during my driving history and have enjoyed the masculine expression of manually gear shifting, channeling Mario Andretti. But with four years of driving on very twisty Apennine Mountain roads, necessitating constant gear changes, I had a perception the muscles in my left leg were at risk of becoming several multiples larger than my right.

And then, Arlene is gathering the courage to tackle the preparation to take the Italian Driving License Test, the passing of which has all the earmarks of what is involved in being allowed to vote in some southern United States by some segments of the population.  Arlene has also stated a clear preference for a vehicle with an automatic transmission. Being sensitive to the idea of bringing my legs back into some level of muscular symmetry, I decided she had a good idea.

As a result, after much soul searching and hours of internet research, we reached the reluctant conclusion to replace our faithful, little blue, city-car Fiat Panda with a vehicle more suited for longer distance exploring by road. We very recently did the deed and purchased a four-year-old car more suitable to what we have in mind. 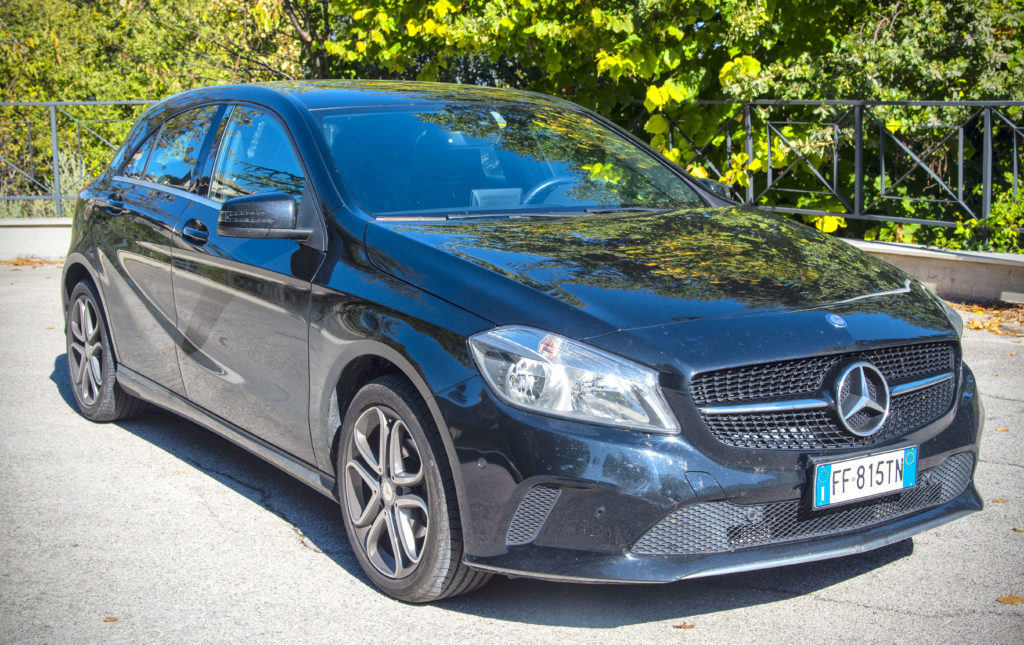 With the ever-appreciated assistance of our friends, the Panda was sold privately to the first buyer. Wanting to believe it was a positive omen by the Italian car-god, the Panda went to the new owner the same day we took delivery of our new passport to the open road.

Immersion on the Adriatic shore was the right place to be during the summer. But that left some residual ‘wanderlust’ to be satisfied. We had talked on the beach of a desire to take a road trip in early October. That motivation was clearly an incentive for us to examine the car issue. With that pent-up appetite to travel, as soon as we had the keys to our ‘road car’, we were anxious to try it out and give it a chance to break-us-in.

With Autumn weather turning colder and what appeared to be a greater viral resurgence in the more densely populated north, we decided to head south. Not long ago, and documented on this Blog, we had gone to Ostuni, the City in White, in the Puglia Region. We had made that trip by train. Puglia is the southern-most province on the Adriatic coast and makes up the so-called ‘heel-of-the-boot-of-Italy’.  We had planned to return and now we were anxious to try out our new transportation alternative.

In early October, we set out.  The replacement vehicle was a change from sub-compact to compact car category and is somewhat longer than the more diminutive Panda by a little over two feet.  It is also some six inches wider, and significantly, about a thousand pounds heavier with a longer wheelbase and a little wider stance. All of which adds to ‘roadability’. But those dimensional changes have taken getting used to. The new view through the windshield is over a longer hood and the rounded corner car body has me not sure just yet, where the car ends.  Plus, my ingrained muscle memory still has me reaching down for a lever to engage the transmission rather than using a small lever behind the steering wheel.  And then there is the automatic transmission. For about fifteen years, we hadn’t seriously looked at cars other than the Panda. While we had owned cars in this category in the past, it seems there have been some serious changes since were last involved with this breed-level.

When we were attracted to this car, I was concerned about my standing with the car-gods in defecting from a manual to an automatic transmission. But fear for the status of my car-soul was relieved when I saw the car was equipped with a provision to manually shift with controls on the steering wheel. However, this was my first experience with an automatic transmission equipped with a seven-gear-change potential and a digital ‘brain’ that is light years ahead of my grasp of what the car needs. During the recent trip, I never touched the manual gear change option. This car is way smarter than I am and the intelligent thing to do became apparent – just watch the road, sit back and let the car make the appropriate operating decisions.

Our trip arrived first in the ancient town of Matera in the Basilicata Region. Basilicata is the southernmost province in the ‘instep’ of the boot of Italy. For centuries, inhabitants have lived in caves. The lodging we chose was in one of the caves adapted to more modern living. We then made a stop in Alberobello, in Puglia, renowned for the unique cone-shaped dwellings called ‘Trulli’. It was then on to Lecce, also in Puglia, with its multi-cultural, ancient history.

To do justice to that overall experience, we will do a separate Blog and include a few photos.

In the meantime, please remain safe and like many of you, we anxiously await the outcome of this very consequential U.S. election. We have already cast our ballots from here. Our prayer is that sound, critical thinking prevails.