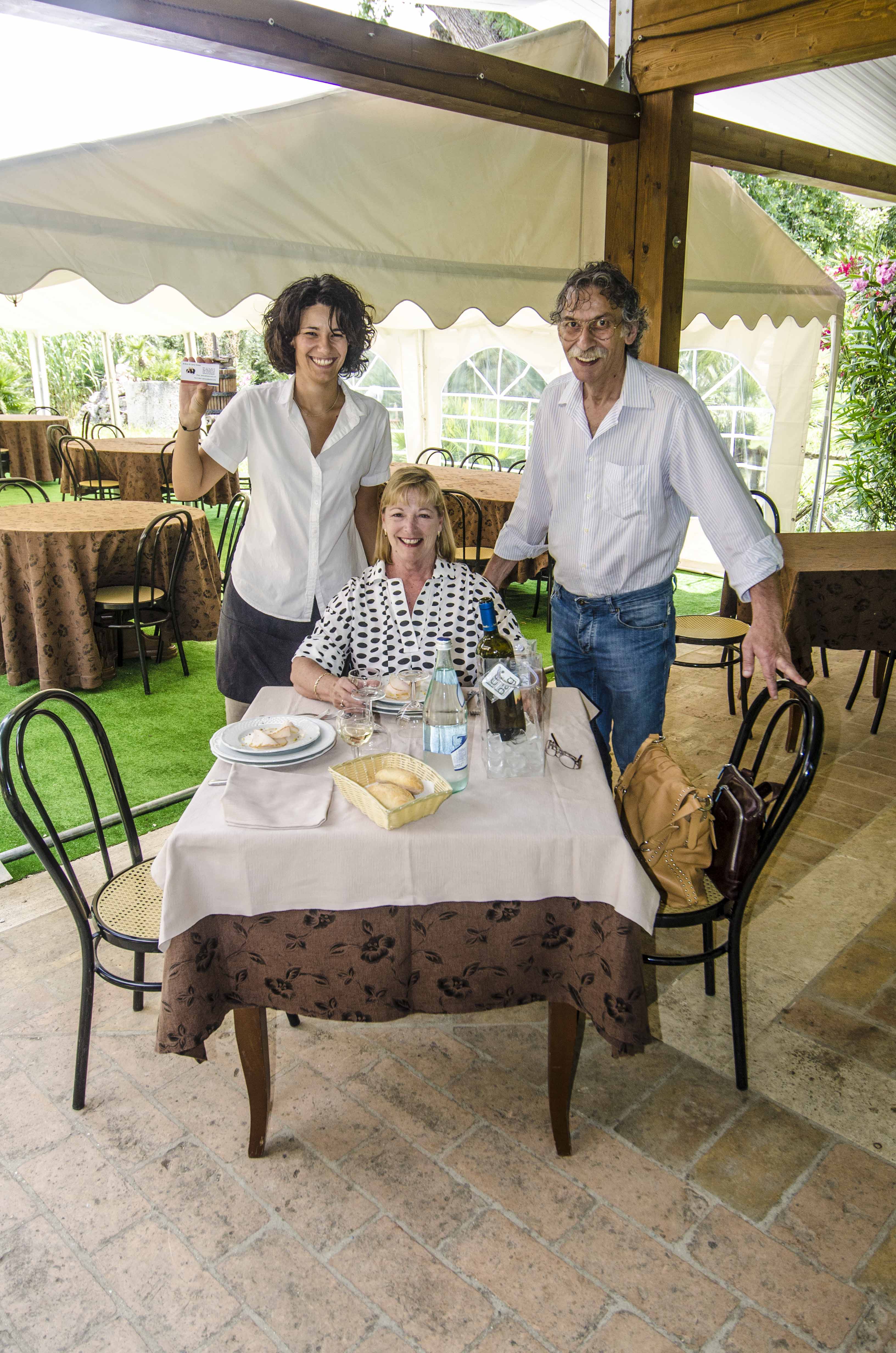 You may have heard me say before we left the U.S. that we were very excited that the landlord of our apartment for the first two months, the beautiful Caterina, worked with her parent’s in their restaurant. I had hoped it was close to the apartment but it actually is located up in the hills a fifteen minute ride out of town which would require a cab ride.

We decided to have Sunday lunch (pranza Domenica) at Country House San Giorgio Ristorante. Several people we had met in the last two weeks knew Caterina and said her mother, Daniela, is an excellent chef and the restaurant outstanding. As often happens in Italy, when we emailed Caterina to make a reservation and ask how long it took by cab to get there, she sent her father, Peppe, to pick us up.

We arrived at a beautifully restored stone house set in the middle of nature and surrounded by olive trees. The house is also a B&B with six double rooms available for rent. We arrived at opening time – 12:45 and were the first ones there. We got to meet all of the Frollo family as well as Cesare, the 30-something hunk of a co-owner (photo on the web site). The dining rooms are beautiful and decorated in antiques but we selected a table in the gardens as they day was gorgeous.

As is typical of Italian restaurants, soon the garden tables were full of family groups with children of all ages. Each member of the group takes a turn at tending to the little ones so no one gets left out. One group was celebrating the 100th birthday of the family patriarch.
From our perfect viewing location, we just enjoyed taking it all in while enjoying an incredible meal typical of the area. No menu, everyone eats the meal of the day.

Chef Frollo has that wonderful ability to use just enough (quanto basta) ingredients in each dish to make it complex yet not overpower the main ingredient.
– First water, bread and a nice crisp local white wine – Passerina.
– Then the antipasto, each dish delivered just as you are finishing the previous one.
1. A small plate of thinly sliced turkey with a few drips of lemon oil and and few pieces of ground pistachios.
2. Two slices each of two different local pecorino (sheep’s milk) cheeses with homemade plum jam.
3. A rice salad (cooked al dente) with with tiny pieces of carrot, pearl onions, some pine nuts and the smallest amount of pancetta. This was served on butter lettuce.
4. A few of the local specialty, warm olive all’ Ascolana, with two mushroom and melted cheese crostini.
5. A small warm vegetable crepe.
– Primo:
1. Homemade raviolis filled with ricotta cheese and spinach with a light sauce of sauted leeks, tomatoes, and local olive oil.
2. A dish that looked like spaghetti, but Caterina was smart enough to ask if we wanted two pastas. We regretfully declined for fear we couldn’t finish the meal. I’m sure it was marvelous.
– Secondo:
1. As was appropriate, a light dish of beautifully cooked medium rare, sliced melt-in-your-mouth beef on a bed of arugula and drizzled with a little local olive oil.
2. A small bowl of fried potatoes. (Yes, lovely french fries, often served here.)
– Contorno:
Enough vegetables had already been served.
– Dolce:
The lightest panna cotta (cooked cream) we’ve ever had (don’t know how it held it’s little shape) drizzled with a lovely dark chocolate sauce.
Three different liquors made by the talented Peppe – licorice, basil and some sort of woodsy root liquor for the more adventurous.

A memorable meal that was a symphony of tastes perfectly prepared that invite you back to explore again. They also introduced us to their American friends that have a house near by and spend a couple months a year here. We spent a couple hours getting acquainted with the Janeways over caffe. They have had their lovely home in the hills for twelve years and have offered to help us if we should need it and to get together again before they leave. Then Caterina refused to let us call a cab, drove us home and went directly back to the restaurant to help with the dinner crowd. These people are incredible. We are so lucky to have found this apartment and, thus, the wonderful Frollos.

Side story: The previous food post was on the Piccolo Teatro Ristorante just around the corner. That was the Frollo’s restaurant for many years but they sold it six or more years ago to go to Australia for three years. Then returned to open San Giorgio with Cesare. We knew Caterina lived in the building next to the apartment, but now we discovered her entire family lives there and it suddenly makes more sense.