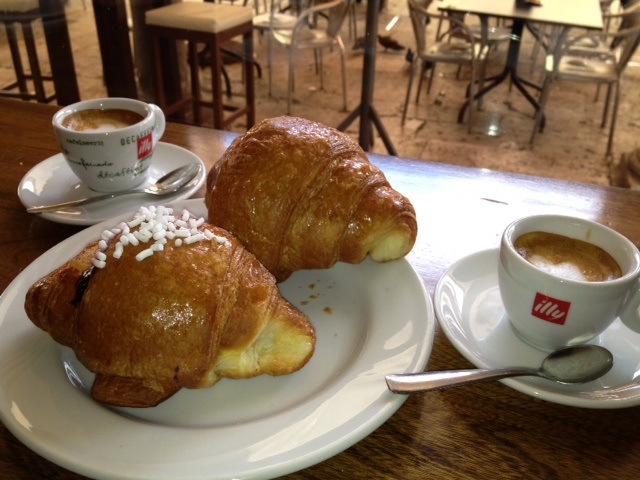 The morning of our first full day in Ascoli we looked up and both the sun and the Italian laundry was out and the twice-weekly market, held in the courtyard of the old cloister of St. Francis’s Church (also known as The Square of the Vegetables) was in full swing. We grabbed a quick caffe and pastry and then made our first purchase from the market – underwear. Yep, left those behind too everything but what I was wearing, but that was unintentional. Fortunately, my good friend Linda went back to our house and retrieved them and they arrived via Federal Express today. Yes, you can buy anything at the market on Wednesday & Saturday – kind of like a Wal-Mart road show, in addition to the fresh vegetables, cheeses, meats, etc. that are available every day in the cloister built completed in 1568.

We walked around town for about three hours the first day to familiarize ourselves with the where things were. With the exception of locations being closer than perceived on Goggle Earth, it immediately felt like we had been here before and like a place we definitely could call home for a while. Larry knew exactly where everything was and I was clueless, following him and taking it all in. Since then we have walked at least two miles a day and many days three or four checking out the neighborhoods. Unfortunately, that just balances out the pasta/vino/gelato consumption.

The City (Citta) – They call it Ascoli. From now on it will be referred to as “our city”. We truly have been dropped into heaven. There are two beautiful main squares (piazzas) located a block from each other and only two blocks from our current apartment which we have enjoyed every day.

The largest, the People’s Square (Piazza del Popolo) which was built in the first decade of the 1500’s is about the size of a football field with about four cafes (one of them being Cafe Meletti, which has been there since 1905) around the edges. This is also where the evening passeggiata and many performances and concerts are held. We have already seen a free dance performance and a free pop-rock concert there in front of the Captain’s Palace (Palazzo dei Capitani) built in the 1400’s. Most of this blog is being written from Cafe Lorenz (yep, Cafe Larry) on this piazza. We managed to keep a table there for five hours on Sunday by ordering lunch (pranza) about 2:30, nursing a bottle of vino for a couple hours, then a second bottle of water, and were still occupying the table when the early evening apperitif time rolled around. So we ordered a Campari with blood orange juice each and managed to stretch our stay out another hour. This is also what we are doing today. It is just past hour two, and we’ll see if they are on to us.

Only one block away is the oldest piazza, Piazza Arringo, which occupies the area where the Roman Forum once was and ever since the Middle Ages it has been the very hub of the political and civil life of the city. It is also rectangular and is distinguished by two magnificent identical fountains and the Cathedral. In addition to the cathedral, this mostly secular city has twenty six churches two cloisters and one active convent, three theaters and six museums. After eleven days here we have not been inside any of them because their interiors do not provide us with a realistic view of life today in Ascoli. Of course, we do plan to enter them and absorb the art and history in time.

Neither Larry nor I are country folks nor do we like routine, so a small village was just not for us. Besides absolutely having to have a car, we would no doubt get bored in a very short time. So the size of Ascoli seems perfect. Tomorrow we will talk about the wonderful people we have met.